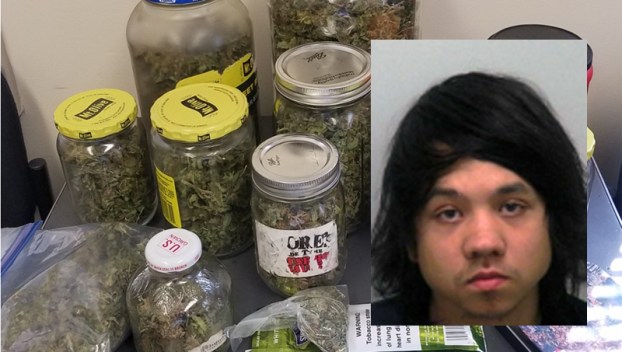 HOMEGROWN: Investigators found nearly a pound of marijuana, along with drug paraphernalia after executing a search warrant on Christian Foster’s home in on Pamlico Beach Road in Belhaven. (Beaufort County Sheriff's Office)

A Belhaven man who was robbed at gunpoint during a marijuana deal in Pinetown earlier this month was charged this week with a variety of drug offenses by the Beaufort County Sheriff’s Office. The charges resulted from the BCSO’s investigation into the robbery.

On Wednesday, BCSO investigators charged Christian Foster, 19, of Pamlico Beach Road in Belhaven, with possession with intent to sell and deliver marijuana, manufacturing marijuana and possession of drug paraphernalia.

Four men allegedly robbed Foster and two other people at gunpoint during a marijuana deal in the parking lot of Farmers Grill in Pantego on Oct. 7, the press release stated. According to BCSO Drug Unit Lt. Russell Davenport, Foster was supposed to be the seller in that transaction. Neither of the other victims was charged with a crime.

“From our investigation, we learned that he was growing and selling,” Davenport said. “Not all grows are inside, of course. He actually had them in flower pots in the woods around his house where he grew them at. Then when it got time to harvest, he was selling it, and it was all packaged up in jars and plastic bags.”

Executing a search warrant at Foster’s home earlier this week, investigators found 439 grams of marijuana packaged in glass jars, plastic bags and a Folgers coffee container used to store pot, the release stated. Foster was held in the Beaufort County Detention Center on a $25,000 bond.

“We always hear how marijuana’s not dangerous and hasn’t ever killed anybody,” Davenport said. “Well, actually it has, in robberies. We see it all the time, because there’s a lot of money being transferred and moved around when you start selling marijuana. People that are involved in drugs and robberies target the people with money, so you become a target of a robbery. Most people don’t expect it to get reported if they rob another drug dealer. It occurs all the time.”

On the night of the robbery, the four men also allegedly stole cash from Foster’s wallet, as well as two firearms from his truck — a handgun and an AR-15 rifle. Davenport said the firearms belonged to Foster and his father. Both guns were later recovered when the four robbery suspects were arrested.

The day after the robbery, the BCSO charged three of the alleged robbers, two of whom were known to the victims.

Latwan Marcell Jackson, 25, of Chocowinity, Stephen Sparrow, 21, of Chocowinity and Garrett Lee Midgette, 19, of Bath, were charged with one count each of robbery with a dangerous weapon, larceny of a firearm and possession with intent to sell or

deliver marijuana. They were all held in the Beaufort County Detention Center on $50,000 secured bonds.

As the investigation continued, interviews with both the suspects and victims led investigators to the fourth suspect. Kyjuan Jykeim Moore, 18, of Washington, was arrested Oct. 15 at the Bellamy Apartments in Greenville with the assistance of the Greenville Police Department.

He was charged with robbery with a dangerous weapon and larceny of a firearm. The AR-15 stolen from the victim’s truck was recovered from the residence where Moore was arrested, officials said. Moore was also held in the Beaufort County Detention Center on a $50,000 secured bond.

Davenport said he does not expect any further charges in this case.

For 25 years, the Humane Society of Beaufort County has gathered people and prizes, turned on the microphone and upped... read more