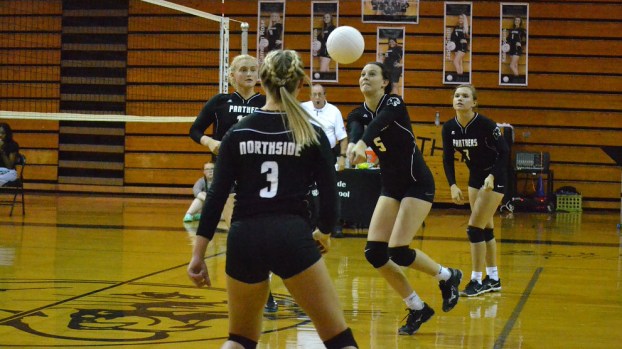 MOVING FORWARD: Northside's Rylie Respess bumps the ball back over the net in a game against South Creek earlier this season. The Panthers move on to the second round of the NCHSAA State playoffs after a three game sweep of North Edgecombe on Saturday afternoon. (Mitchell Thomas / Daily News)

LEGGETT — The Pinetown Panthers are marching onward in the NCHSAA State playoffs after sweeping the North Edgecombe Lady Warriors 25-9, 25-15 and 25-6 on Saturday afternoon in Leggett.

The Panthers are the 18-seed in the tournament. Since Northside finished third in the Coastal Plains 1A conference, they were forced to go on the road for the first round. They will have to keep winning on the road to battle their way through the bracket.

Senior starter for the Lady Panthers Elyse Brinn, said that her team was ready to take care of business and move on in the tournament.

“We wanted to go ahead and get it done. So we stayed focused and did what we needed to do,” Brinn said after the game. “We hit hard and served good. (Kathleen Slade) had a 15-point serve streak in the third set.”

Slade’s serves have been a consistent strong point for the Panthers throughout their season.

Head coach Michelle Leathers said that her team did a nice job on Saturday, but the celebration will be short lived with Falls Lake next up.

“Our serving and hitting was on. Kat served 12 aces in a row. She, Katie Godley and Hannah Baker’s hitting was on,” Leathers said about Saturday’s win. “We have to prepare for a more disciplined group of young ladies (in Falls Lake Academy) who can place the ball, hit it, and put it into open areas.”

The Panthers have a solid mix of seasoned veterans and youngsters on the team that have all pitched into their success throughout the season. The depth of the Panthers team will be a plus as they head into a tough matchup against second-seeded Falls Lake Academy.

“We practice for every game like it’s our last, whether it’s regular season or the playoffs,” Brinn Continued. “We’re always going to give it our best.”

Falls Lake Academy won their first round matchup against Eno River Academy on Saturday morning with a sweep in three sets. The Firebirds are 22-3 on the season with a 15-1 conference mark in the North Central 1A.

The Panthers will have to travel to Creedmoor on Tuesday evening for a second round matchup in the NCHSAA state playoffs.

Northside 28, South Creek 8The defense was dominant for the Panthers on Friday night. Northside did not allow a single... read more