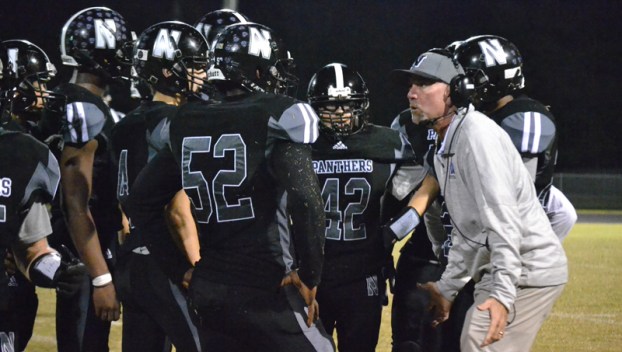 INTENSITY: Head coach Keith Boyd instructs his players during a timeout in the Panthers' 28-8 win over South CreekFriday night to improve to 6-3. (Mitchell Thomas / Daily News)

There were only two football games across Beaufort County on Friday evening, and both teams drove home victorious. The Washington Pam Pack’s quest for a conference championship remains alive and well after a 42-8 victory over South Lenoir on Friday night. The Northside Panthers also picked up a huge conference win over South Creek, 28-8.

Northside’s defense came to life on Friday night, not allowing a single offensive score. The Panthers likely solidified a spot in the top three of the Coastal Plains 1A Conference behind Tarboro and Pamlico County with their win on Friday night. In the latest 1A state playoff projections from HighSchooOT.com, the Panthers are shown hosting North Duplin. Northside already defeated the Rebels on the road earlier season.

On Friday night, many players were deserving of recognition. Omari Crandell had the awareness to pick up a ball that was thrown backwards by South Creek’s quarterback, and he took it in for the touchdown. Senior outside linebacker Antonio Brooks made some big tackles in the flats, preventing the Cougars from being successful with their jet sweep.

The Cougars tried to force it inside with Demorian Smith, but Clark O’Neal, Fred Taylor, Jon’Malik Freeman, Mitch and Will Godley bottled up any type of production from the inside runs. The secondary also did a great job sticking with the receivers when South Creek was forced to throw the ball late.

Head coach Keith Boyd read a play from the sidelines, screaming to Holland that his responsibility was going to be the pitchman on the Cougars’ speed option. Holland would force a fumble on the play and Mitch Godley recovered.

Offensively, James Gorham reached the end zone twice on 99 yards rushing, bringing his touchdown total to 11 on the season. Tyler Turner also deserves credit for his concentration skills, catching a deflected pass on a slant and taking it the 55-yard distance for the score.

As for the Pam Pack, they continue to do what they do. The defense has been staggering aside from the shootout against D.H. Conley a couple weeks ago. They dominated the line of scrimmage, again. In the first half, Terry Moore, Antwone Godley and Mykel Warren all had rushing touchdowns. Jaden Hambric added a touchdown right before the half to extend the lead to 28-0 at half. Godley would finish with 132 yards and accounted for three touchdowns on the night. Two of those were rushing scores and the other was a passing touchdown to Walt Gerard in the second half.

In the latest playoff projections, the Pam Pack is the No. 2 seeded team in the 2AA east region, with a matchup against 15th-seeded Carrboro. With the conference title up for grabs on Friday night for Washington and West Craven, the winner could become the No. 1 overall seed for the eastern region.

The Southside Seahawks are currently on the outside looking in for the 1A state playoffs, listed in the “first 5 out” portion of the bracket. The Seahawks picked up their first conference victory of the season with the Jones Senior forfeit, and will have a big matchup with Riverside this Friday night for homecoming. If the Seahawks can string together another win or two in their remaining schedule, they could find a place in the 1A state playoffs as well.

Northside 28, South Creek 8The defense was dominant for the Panthers on Friday night. Northside did not allow a single... read more