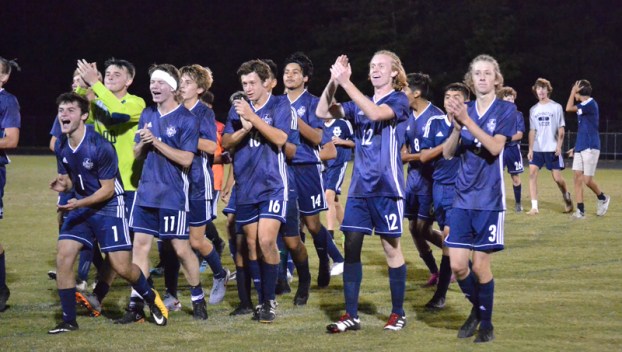 CELEBRATION: The Pam Pack soccer team trots off the field and shows their respect to the big crowd that came to support them on Senior Night after their 9-0 win over West Craven. (Mitchell Thomas / Daily News)

It was a storybook type of ending for the Washington soccer team on Monday night, using a 40-yard free kick from Edert Barrera with 16 seconds remaining that floated into the top right-hand corner of the net for the 9-0, mercy-rule, walk-off ending.

Many of the seniors were sporting new hair-dos. Goalkeeper Will Crisp shaved a Washington “W” into his hairline, Stewart Hopper rocked a mullet, Dawson Cox shaved the sides of his head, while Brandon Cox and Tripp Pippin corn rowed their hair in some fashion. 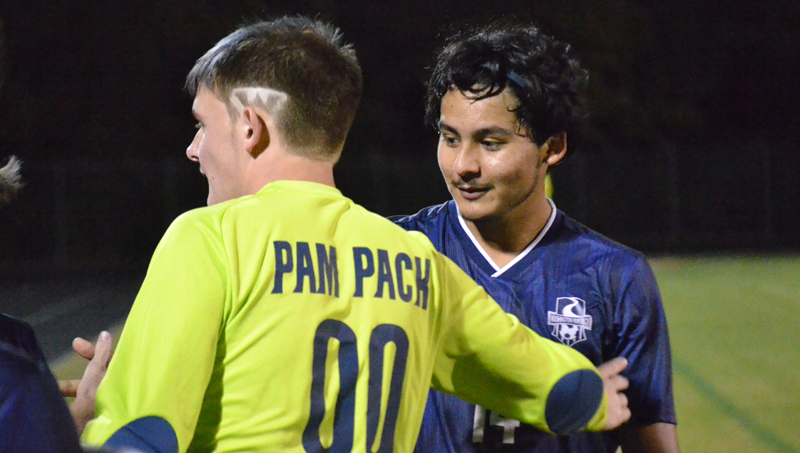 GOOD GAME: Washington senior goalkeeper WIll Crisp greets his teammate, Luis Ramirez as he trots off the field on Monday night. Crisp had a “W” shaved into his hair. (Mitchell Thomas / Daily News)

Luckily for them, the hair didn’t have an effect on the Pam Pack’s play. A couple of goals from Mike Reid in the first half jump-started the Washington onslaught.

At halftime, seniors on the team were recognized for their four-year careers in Pam Pack jerseys. They announced their most memorable soccer moment from their tenures and future plans after graduation.

In the second half, the Pam Pack scored four goals within the first 20 minutes. A fifth came when Barrera scored his first goal of the contest. The boot curled away from the keeper, but he got a hand on it. The ball deflected off the post, off the West Craven goalkeeper’s noggin, and trickled into the back of the net for the 8-0 lead.

A lot of the young guys were sprung into action at that point, but Barrera wasn’t finished just yet.

Barrera’s 40-yard free kick as time dwindled under 20 seconds, sent the Pam Pack bench into pandemonium. The goal was just beyond the reach of a fully extended goalkeeper, and Washington players dog-piled on top Barrera.

“Yeah, for sure,” Barrera said when he was asked if that was the longest goal he’d ever scored. “I just had confidence in myself, so I just shot it. I really wanted the goal and I knew I had it.”

Despite the excitement, the Pam Pack (14-2-2, 10-1 Eastern Carolina 2A) now must turn their attention to first-place Greene Central. The Rams (18-2, 10-1) defeated the Pam Pack earlier this season, for their lone conference loss. Greene Central lost to North Lenoir in penalty kicks. The winner of the game will clinch a home playoff game, and the Eastern Carolina 2A Conference.

“The guys played great, it was a good win for our seniors,” Dawson Cox said after the game. “We got to play like we know how to (against Greene Central). We have to possess the ball, and then when we possess the ball we can move forward. That’s how we lost last time.”

Head coach Jim Kozuch laughed about how the game ended, knowing Barrera was going to shoot it.

“That was awesome. I had a feeling he was going to take the shot, but did I think it was going to be that good? No, that was awesome. I got a huge smiled on my face I can’t wipe off right now. Perfect way to end Senior Night,” Kozuch said. “We just have to tighten up defensively. Offensively, I know we’re tough to mark up with. If we can play good defensive soccer (against Greene Central), I think we’ll win.”

There were only two football games across Beaufort County on Friday evening, and both teams drove home victorious. The Washington... read more