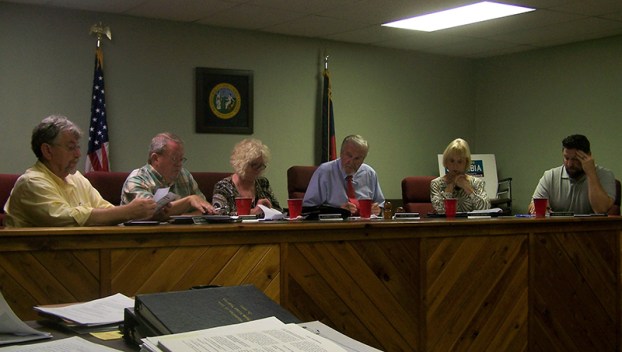 Incumbents Lloyd Armstrong and Sandra Owens are running unopposed in the Nov. 5 election for four-year terms on the Columbia Board of Aldermen, shown above. From left are Armstrong, Hal Fleming, Sandra Owens, James Cahoon (mayor), Sue Griffin, and Brian Owens. (R. McClees photo)

Columbia’s municipal election has generated little conversation or activity, most likely because the two incumbent aldermen are the only names on the ballot.

Lloyd Armstrong and Sandra Owens filed for four-year terms, and no one challenged them before the deadline passed.

Write-ins are allowed on the ballot, so there is the possibility of a latecomer making it a race on Nov. 5.

The election is going to cost town taxpayers about $5,700 because the State Board of Elections insists the town use a vote-counting machine rather than paper ballots and a hand count as requested by local officials.

In the past the state board had allowed hand-counting in “very limited circumstances,” Karen Brinson Bell, the state board’s executive director, explained, “provided that all election contests on the ballot were uncontested and the population of the municipality was very small.”

Columbia officials and the Tyrrell County Board of Elections asked for authority to use paper ballots and tabulate the results by hand counting the ballots on Nov. 5.

Bell replied, through a memo to county elections boards across the state, that “hand counting is no longer permitted for municipal elections.”

She explained that the state board’s decision was “due to concerns with the Americans with Disabilities Act (ADA) compliance and Help America Vote Act (HAVA) requirements. We understand this decision may impose additional costs on small municipalities that seek to have the municipality’s ballots hand counted. However, we are also cognizant of the burden imposed on voters with disabilities when they are not able to access voting equipment that allows them to vote independently.”

Mayor Cahoon wrote back that Columbia will comply with the state’s ruling, but he challenged its logic.

“I just do not see how using paper ballots would discourage or eliminate opportunities for our disabled citizens to vote or deprive them of privacy in voting,” Mayor Cahoon wrote. “It seems to me that whether it is electronic voting or paper ballot, some accommodations will need to be made for some individuals depending on the disability.  I just feel that this is another case of ‘one-size-fits-all’ and individual circumstances are not given serious consideration.”

“The bureaucracy seems to ignore the fiscal concerns related to these issues for small municipalities like ours which often have less than 200 people voting in municipal elections,” the mayor added.

Town Manager Rhett White said a hand-count election would cost the town about half the projected amount, or a saving of perhaps $2,850.