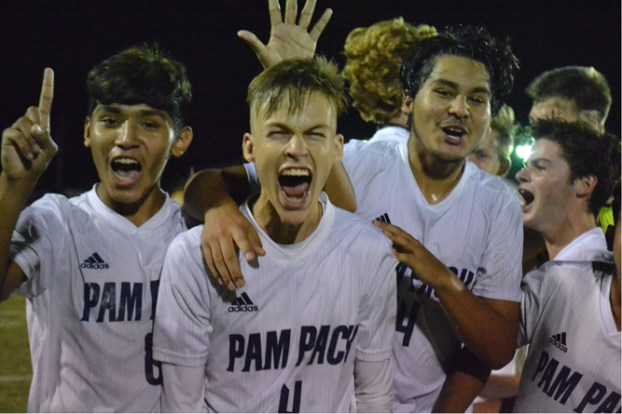 SEVEN STRAIGHT: The Washington Pam Pack have won the conference championship for the sixth consecutive season, with a 6-5 victory over Greene Central on Wednesday night. (Mitchell Thomas / Daily News)

In an absolute thriller of a soccer game, the Washington Pam Pack prevailed over the Greene Central Rams, 6-5, on Wednesday night in Snow Hill.

Elvin Elizalde found some space in the game’s first five minutes. He beat his man and chipped the ball over the goalkeeper’s head for a 1-0 advantage.

The Rams answered right back with a goal of their own to tie it up.

Midway through the first half, Elizalde had an opportunity to score again. This time, he was hooked from behind in the penalty area, awarding the Pam Pack a penalty kick. The referee sent off the defender guilty of the foul, and Dawson Cox buried the kick in the bottom right corner of the net to pull ahead. 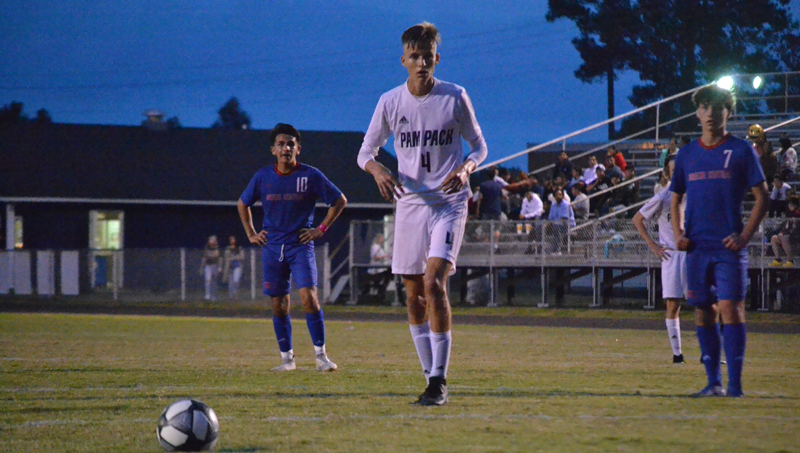 LINING IT UP: Washington’s Dawson Cox lined it up from the penalty spot and buried it to pull ahead 2-1 in the first half of their game against Greene Central. (Mitchell Thomas / Daily News)

With 10 minutes remaining in the half, a Ram attacker got bumped in the box for another penalty kick. Greene Central converted and tied the game up again before half.

Washington again found a break through early in the second half. Dawson Cox set up for a free kick that grazed the head of Graham Parker, redirecting the ball’s flight enough to beat the keeper.

Similarly, the Pack added another goal on a long throw-in from Graham. Cox got his head to it just enough to float over top of the Greene Central keeper to extend the lead to 4-2.

Graham wasn’t done assisting, though. On a corner kick with seven minutes remaining, he floated one to the far post and Luis Ramirez was there to bury it.

The final Pam Pack goal came from Elizalde again to increase the Pam Pack advantage to 6-2. 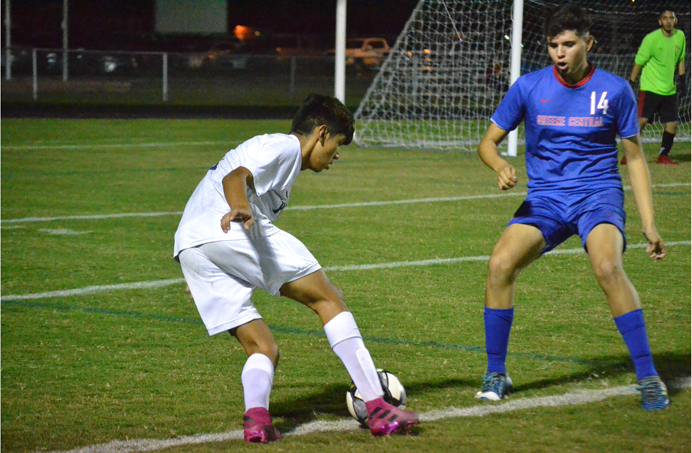 ANKLES: Washington’s senior attacker Elvin Elizalde crosses up a defender and drops him to the turf on Wednesday night. (Mitchell Thomas / Daily News)

Greene Central wasn’t finished. They scored three goals in the final five minutes to cut the deficit, but it was too late. The Pam Pack are the champions of the 2A Eastern Carolina Conference.

“We knew it was going to be a battle tonight,” Pam Pack head coach Jim Kozuch said. “It wasn’t a pretty game, but the bottom line is, we put some goals in the back of the net. We gotta clean up the defense and get back to moving the ball around a little bit more. Can’t give up five goals in the playoffs and win a game.”

Seth Davis said the Rams had some talented attackers, but was happy that his team got the win.

“Their strikers are really good. They made some great runs across the middle. Our (center defensive midfielders) did a great job of following them. Our defense played great,” Davis said. “It feels great. We kept the streak alive, and that’s what feels the best.”

The Pam Pack soccer team has either had a share, or an outright conference title every year since 2013.

Pam Pack senior and captain Dawson Cox said he was very excited for his teammates.

“Ah, man. It feels amazing. All the hard work and everything all season just comes together for this one night,” Dawson Cox said. “It means a lot. We’ve been playing with each other since we were six or seven years old. Through rec league, travel soccer, we came out here tonight and played as a team and won as a team.” 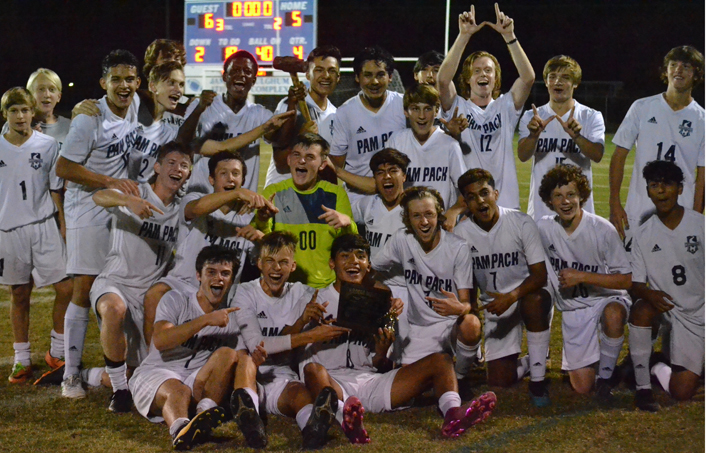 The final two weeks of the season brings a lot of uncertainty and excitement. The Pam Pack will be battling... read more