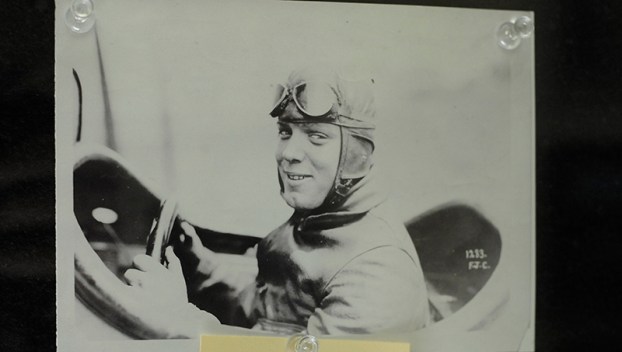 HIGH FLYER: Jim Baugham, a Washington native and member of the Lafayette Flying Corps in World War I, was killed in action at the age of 19. Now the N.C. National Guard Museum Foundation is seeking more information about four Beaufort County members of the 119th and 120th regiments who fought in a battle in France that’s considered to be the turning point in that war. (Vail Stewart Rumley/Daily News)

Washington native Jim Baugham volunteered for the French Lafayette Flying Corps when he was 17 years old, too young to enlist in the U.S. armed forces in World War I. At 19, he was shot down after taking on three German fighters simultaneously. War escapades like Baugham’s, in the sky and on the ground, later became the basis of the film “Lafayette Escadrille” starring Tab Hunter and a young Clint Eastwood, which premiered in Washington in 1958.

While Baugham might be the most recognized of WWI fighters from Beaufort County, there are four more the North Carolina National Guard Museum Foundation is seeking information about. Each would have been born prior to 1900, and on Sept. 29, 1918, fighting in France with the 30th “Old Hickory” Division, each gave their lives to break the Hindenburg Line, leading to end of the war, according to a letter from John Merritt, chairman of the Foundation’s North Carolina Monument Project.

Those Beaufort County soldiers were:

On Nov. 10, a monument to these soldiers and others who lost their lives that day will be dedicated near the town of Nauroy, France, where the fighting took place. Merritt is seeking information about the four men.

“The N.C. National Guard breaking the Hindenburg Line at the St. Quentin Canal on Sept. 29, 1918, was a critical turning point near the end of the war. Breaking out of the trenches increased maneuverability and the 30th Infantry contributed mightily through the end of the war. New York, Tennessee, France and Australia all have monuments or memorials to the actions of that day, each claiming they led the effort to break the line. The British even have two memorials that commemorate breaking the line. However, this impregnable defense was actually broken by the National Guard 30th Division from North Carolina, who originally penetrated the line and took the high ground. It is now time to commemorate their sacrifice,” the Monument Foundation website reads.

The foundation has also raised funds to replace a small existing monument in Raleigh dedicated to the 30th Division with a larger one. As part of each ceremony, soil from all of North Carolina’s 100 counties will be distributed at both sites, the website states.

Those with information about Boyd, Corey, Lindsay or Judkins are asked to visit the monument website www.ncww1monument.org and register. For more information, email jmerritt@dramtreeconsulting.com.

For 55 years, Arts of the Pamlico has been putting on a display of some of the finest art to... read more