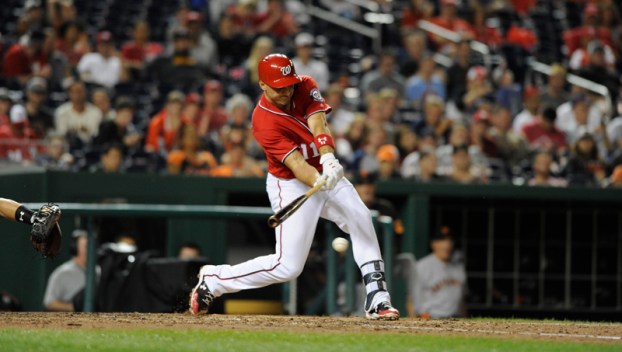 CHAMP: Washington Nationals first baseman Ryan Zimmerman takes a cut during a game against the San Francisco Giants in 2017. Zimmerman and the Nationals won the World Series over the Houston Astros in Game 7 on Wednesday evening. (Ashley Vansant | Daily News)

HOUSTON – Ryan Zimmerman is a World Series champion. He and the Washington Nationals got two home runs in the seventh inning of Wednesday’s Game 7 to beat the Astros, 6-2, in Houston.

It has to be the absolute pinnacle of Zimmerman’s career, even considering all the individual accolades. Nicknamed “Mr. National,” Zimmerman was the Nationals’ first draft pick when the franchise moved from Montreal.

Before being drafted fourth overall in 2005, the 2009 Golden Glove, two Silver Sluggers awards, and two All-Star Game berths, Zimmerman was born in Washington on Sept. 28, 1984.

And it says so every time Zimmerman steps up to bat. Stadium big screens will denote his birthplace although he knows little about the “original” Washington.

Zimmerman’s parents lived in Plymouth when he was born. As his mother, Cheryl, joked in 2017, she didn’t want to give birth in Plymouth, so they made the trek to Washington. His father Keith said Ryan was born so quickly he almost missed it.

Zimmerman and his family moved to Edenton soon after his birth. That’s where he said his love of baseball began. But the family moved again before too long – this time to Virginia Beach. That’s where Zimmerman’s baseball career was fully nurtured. He was a standout in high school and played his collegiate baseball at the University of Virginia.

He also fell in love with surfing.

Zimmerman told the Washington Daily News in 2017 that he doesn’t know much about Washington. Baseball has understandably kept him busy. He said visiting his birthplace is on the to-do list for once his baseball career winds down.

And Zimmerman’s career could very well be winding down. His contract with the Nationals is set to run out now that the season is done. Even with injuries being a concern in recent years, this postseason proved Zimmerman still has plenty to offer if the Nationals want to bring him back or if another club can lure him from the nation’s capital.

But Wednesday could have also been the storybook ending to his 14-year career. And while professional baseball soon may not be part of Zimmerman’s day-to-day, he still has the ziMS Foundation to work with. He has helped to raise millions of dollars for multiple sclerosis research, hoping to one-day find a cure for the disease that has afflicted his mother since 1995.

It won’t be on the same level as the upcoming parade in D.C., but there will be a celebration whenever it is that Zimmerman is able to visit “little” Washington. The city has plenty to celebrate about Zimmerman. Hopefully, when he swings by Rachel K’s for a cup of coffee or grabs a Bill’s Hot Dog to enjoy on the Washington Waterfront, it will feel like home.

With an improbable 3-2 deficit going back into Houston, the Nationals chances to win the World Series looked bleak. Not... read more