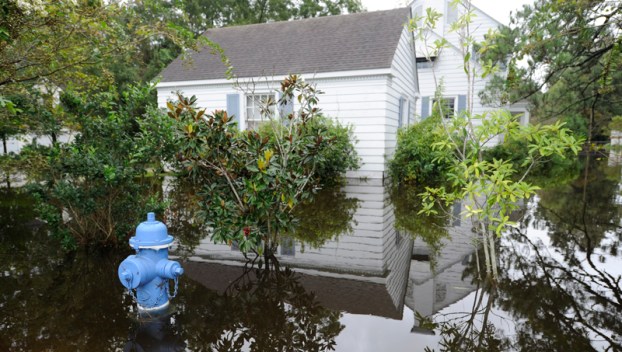 WATERFRONT: Many properties in the waterfront neighborhood of Washington Park were inundated with floodwater during Hurricane Florence in September 2018, including this home, which is currently being raised. (Daily News)

Years in the making, new FEMA flood maps for Beaufort County are set to go into effect on June 19, 2020 — more than two years after originally scheduled.

A series of natural and manmade events, ranging from disruption in the process by hurricanes Florence and Michael and FEMA moving its mapping analysis unit to a new server, to changes requiring additional comment periods caused the FEMA maps to be delayed, which some Beaufort County commissioners have said has kept a financial burden on those residents paying high premiums for properties that will be taken out of flood zones once the new maps are put into effect.

Now the letter of final determination date approved by FEMA is Dec. 19. A six-month waiting period puts the new effective date in June, just in time for the 2020 hurricane season.

However, five months later, in October, FEMA will launch Risk Rating 2.0, a program that will revolutionize how FEMA and the National Flood Insurance Program will assess flood risk.

“In October 2020, all rates will then again be adjusted according to (Risk Rating) 2.0,” said Beaufort County Manager Brian Alligood in a recent update.

Alligood said the program will assess flood risk at the individual property level, for example, how far a property is from the water, the elevation of the property and how much it would cost to rebuild a home lost to flooding, as opposed to the more general assessment of whether a property exists in a flood plain or outside of a flood plain.

In a previous interview Alligood said the maps are based on averages, so regardless of whether a property is removed from a flood plain, owners would be wise to keep their flood insurance if their property is in danger of flooding.

“What we have continued to tell people and what we have preached from Day 1: you know where you live, you know if you flood. Do not get rid of flood insurance,” Alligood said at the time. “Don’t let somebody in Raleigh or D.C. to tell you you don’t need insurance. Don’t let a map tell you something differently than what you already know.”

The new flood-plain mapping can be seen at the North Carolina Flood Risk Information System website at http://fris.nc.gov/fris/.

Voting in local municipal elections will take place at 10 polling places throughout Beaufort County from 6:30 a.m. to 7:30... read more