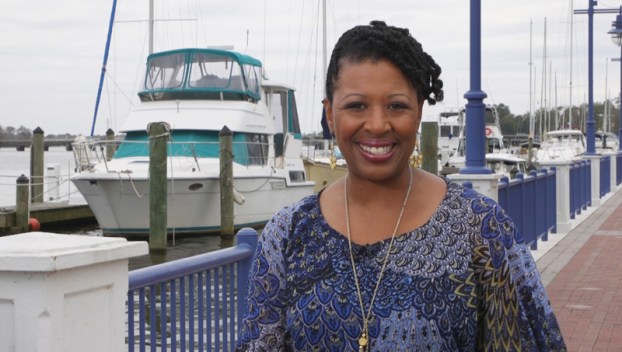 ON LOCATION: “North Carolina Weekend” host Deborah Holt Noel visited Washington, and many of its restaurants, businesses and attractions, during a five-day stay in September. The more in-depth look at the town, called ‘Weekend in Washington’ will premiere Thursday on UNC-TV. (UNC-TV)

A typical day in Washington might involve a trip to Bill’s Hotdogs, driving past Elmwood 1820, the historic West Main Street bed and breakfast, or taking a waterfront walk past the North Carolina Estuarium — familiar sites to those who live in Washington. Thursday, the rest of the state will be introduced to those spots and more as the UNC-TV segment called “Weekend in Washington” premieres at 9 p.m.

“About three years ago we started doing periodic ‘deeper dives’ into towns around North Carolina and calling them ‘A Weekend in …’. These stories are typically twice as long or longer than our typical ‘North Carolina Weekend’ features, and the goal was to try to suggest almost an itinerary of how to spend a weekend in a particular town with a little bit about its history, things to do, the food scene, the arts scene and a place to stay,” David Hardy, senior producer at UNC-TV, wrote in an email.

Those categories are covered in the upcoming Washington episode, from Elmwood 1820 on the west side to Inner Banks Outfitters and Backwater Jack’s Tiki Bar and Grill on east, and cover many places in between: The Loft on Main Airbnb, the Estuarium, Washington Waterfront Underground Railroad Museum, the Turnage Theatre, The Hackney, Bill’s Hotdogs, Washington Crab Shack, Grub Brothers, Down on Mainstreet, Rachel K’s, Secret Garden Boutique and Gallery, Washington Harbor District Market, Lemonade Art Gallery, Little Shoppes, Wine & Words & Gourmet all make an appearance in the segment.

In September, host Deborah Holt Noel and a two-person crew visited each of these spots and more over five days and took a lot of footage.

“In fact, it took editor Rebecca Ward two weeks to cut the footage down and edit an 11-minute story,” Hardy wrote.

Edenton, New Bern, Southport, West Jefferson and Kinston have all made the list of towns featured in prior episodes. Hardy said they chose Washington due to a work connection — fellow UNC-TV producer Clay Johnson lives in Bath and commented to Hardy on the waterfront, as well as the new restaurants opening downtown. For Washington Tourism Development Authority Executive Director Erin Ruyle, the promotion could translate into more visitors.

“We’re just excited, because it reaches a different audience and just to be showcased in Washington. (Holt Noel) has a pretty loyal following. When she was here in town people recognized her, so she has a presence,” Ruyle said. “We’re just excited about the exposure.”

“I think it’s one of the best ‘Weekend in’ stories we’ve done, and Deb and the crew came away from there talking about how friendly the townspeople are and just the overall good-natured pride in their hometown,” Hardy said.

City of Washington water customers may see some brief drops in pressure and cloudiness in their tap water as public... read more