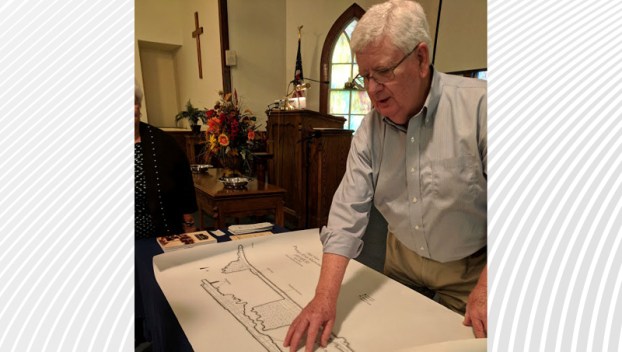 GUIDING STAR: Dr. Lewis Forrest discusses a drawing of the schooner Star, the result of measurements taken by the divers during underwater explorations in 2001, 2002 and 2003. (Clare Baum)

Capt. David Gaskell ran the Union blockade in the Pamlico Sound on returning from the West Indies in 1862 and the schooner was later burned to the waterline and allowed to sink in the Pungo River.

The Mattamuskeet Foundation sponsored underwater archaeological investigations in 2001, 2002 and 2003 to confirm the oral history and document remains.

Following the 2003 dive, an East Carolina University graduate student, Travis Snyder, wrote his master’s thesis on the Star, comprehensively documenting her twenty-year history, including a list of owners and masters. A copy of the thesis is a part of the historical research materials section at the Mattamuskeet School library.

The fall issue of the Society’s journal, “High Tides,” has an article about the Star as well as an article about Stonewall Jackson and two Hyde County soldiers among other articles.  Copies are available at R.S. Spencer, Inc. in Engelhard.

For information, call 252-542-0000 or go to the Society’s Facebook page www.facebook.com/HydeCountyHistoricalAndGenealogicalSociety/ or www.ncgenweb.us/hyde/HYDE.HTM.

A multitude of music!

The Arts of the Pamlico has a wide array of music events on an ongoing basis. Over the next two... read more