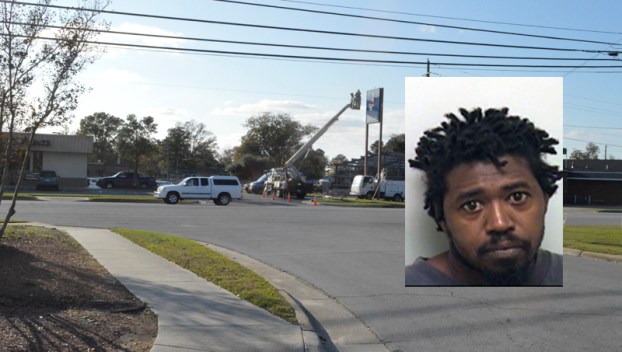 TRAFFIC FATALITY: An 83-year-old Washington resident was struck and killed by a vehicle while attempting to cross Carolina Avenue on his motorized wheelchair near this intersection Saturday afternoon. Police say the driver of the vehicle, 37-year-old Neal Lawrence (pictured), fled the scene and is facing criminal charges as a result of the accident. (Matt Debnam/Daily News)

A Washington man is facing criminal charges this week after leaving the scene of a fatal car accident that killed an 83-year-old man on a motorized wheelchair.

According to police, Washington resident James Whitaker was attempting to cross Carolina Avenue on his wheelchair near the intersection of North Pierce and West Seventh streets Saturday afternoon when he was hit by a southbound vehicle. Washington Police and Fire Services Director Stacy Drakeford says Whitaker died at the scene.

According to Drakeford, the driver of the vehicle, 37-year-old Neal Lawrence, proceeded to flee the scene, returning a short while later, allowing officers to determine his identity.

“He left his car and then he fled on foot,” Drakeford said.

Lawrence was charged this week with felony hit and run resulting in death or injury, death by motor vehicle and driving with a revoked license. His bond was set at $6,000 and he was held in the Beaufort County Detention Center. Drakeford says more charges may be possible in the case.

There is no pedestrian crosswalk on that stretch of Carolina Avenue, a four-lane road with a turning lane in the middle. The nearest crosswalk to the scene of the accident is at the intersection of Fifth and Bridge streets. While Carolina Avenue sees a considerable amount of pedestrian and bicycle traffic, there are no marked crosswalks on the road between Fifth Street and 15th Street.

It was a photo finish in four municipal elections in Beaufort County on Tuesday evening, and the final results may... read more