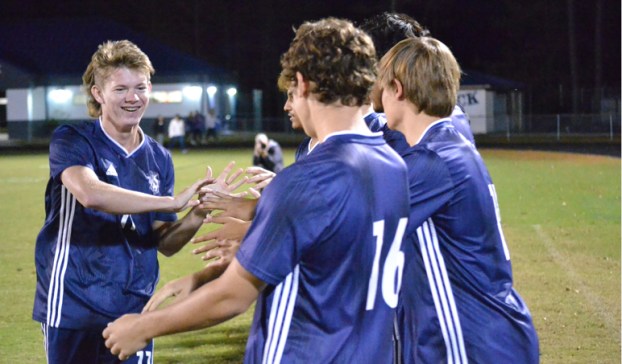 After an incredible 2019 campaign, the Washington Pam Pack soccer team’s first-round matchup with East Duplin went through three overtimes and penalty kicks, in which the Pam Pack lost, 6-5.

In regulation, both teams had first half breakthroughs. East Duplin got a rebound goal within the first 20 minutes, and just five minutes later, Elvin Elizalde got a bounce from a corner kick and headed into the back of the net to tie it.

The Panthers possessed the ball the majority of the second half, while the Pam Pack tried to take advantage of fast break opportunities. Midway through the second, senior Michael Reid landed awkwardly and hurt his lower back. He would sit the rest of the match.

Opportunities came and went through the overtime periods, but the ball never crossed the goal line. Once penalty kicks came into play, the stands emptied onto the field and all eyes looked towards the penalty box.

It was an electric atmosphere, but the Pam Pack couldn’t quite sink the go-ahead penalty kick. Ridge Zerniak, Bryan Martinez, Dawson Cox, Elvin Elizalde and Seth Davis sunk their PK’s, but the Panthers scored six.

Many Pam Pack seniors left the field for the last time, and head coach Jim Kozuch said he was going to miss this group.

“These guys are really, really good kids. They’ve done so much. Everybody counted them out last year after we had a big senior class leave. These guys really stepped up and played great. It absolutely stings. It hurts, but they have to look back at all the good they did,” Kozuch explained. “They had a great season. They won 15 games, scored (a ton) of goals, won some games in Greenville, there was a lot of good that came out of this year.”

Sophomore Bryan Martinez’s role will increase for the Pam Pack next season, and said he was going to miss the seniors.
“This season meant everything to me. These boys are like my brothers. It’s sad that this is the last time I get to play with the seniors,” Martinez said. “We had a heck of a season, we played so good, I thought we could take it to the state championship. I just enjoyed being around these guys every day. We just have to come back next year even stronger.”

The Duke Blue Devils host the Notre Dame Fighting Irish this weekend, Nov. 9 at 7:30 p.m. This will mark... read more