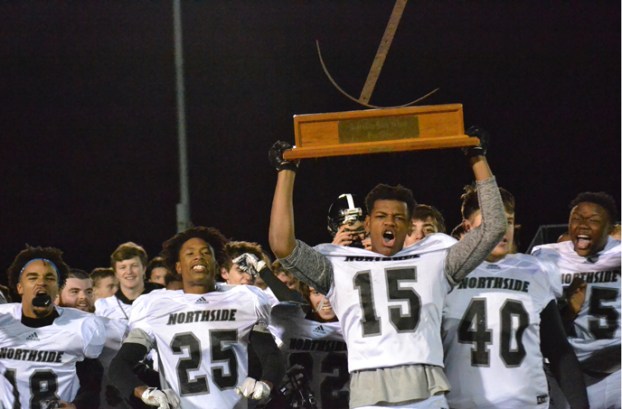 ANCHOR BOWL: The Northside Panthers came away victorious over the Southside Seahawks on Friday night by a score of 47-19. (MItchell Thomas / Daily News)

The Panthers are taking the Anchor Bowl trophy back to Pinetown. Northside improves their record to 7-4 and 4-2 in the Coastal Plains 1A Conference heading into the playoffs next Friday night. The NCHSAA brackets have the 5-seeded Panthers hosting 12-seeded KIPP Pride (5-6, 4-2) on Friday night.

Despite Southside’s (4-7, 2-4) loss, they will still likely earn a trip to the playoffs. The official NCHSAA bracket has 9-seeded Southside traveling to Robersonville for the second time this season to play South Creek (5-6, 3-3 Coastal Plains 1A). The first matchup this season ended in a 38-26 Cougars win.

Early on, the Panthers stuck to what has worked all season long. On the game’s first drive, they drove the ball down the field and scored on a James Gorham touchdown run. He would score three touchdowns on the night, upping his season total to 14. 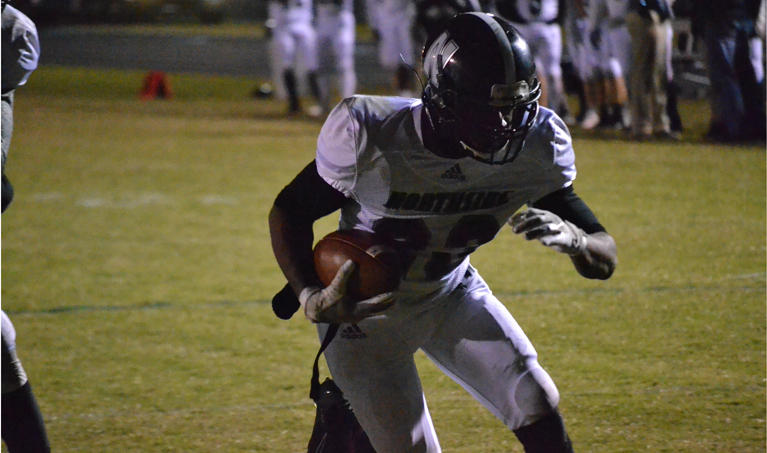 RUNNING HARD: Northside’s James Gorham had well over 100 yards rushing on the night with three touchdowns. He now has 14 touchdowns on the season. (MItchell Thomas / Daily NEws)

Southside responded. After driving the ball the distance of the field, the Seahawks came up short on a fourth down. The Panthers were forced to punt inside their own five-yard line. Southside scored on a Jamari Nelson 3-yard carry to cap the 35-yard drive. 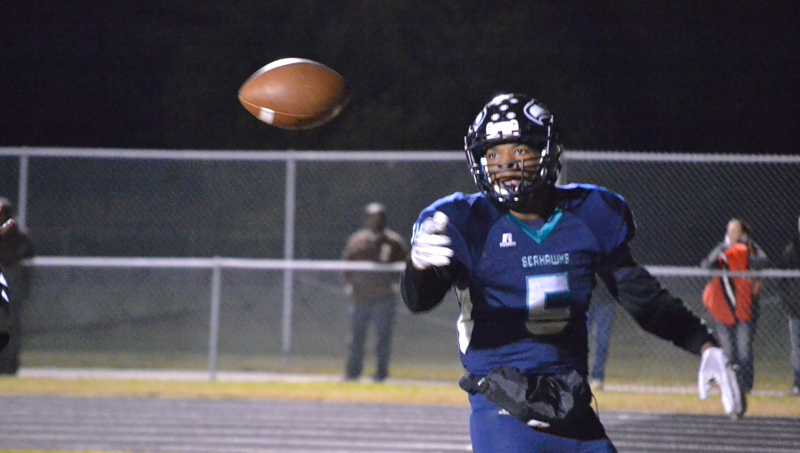 STELLAR SEASON: Southside senior running back Jamari Nelson tosses the ball back to the official. He continues his great season with a touchdown on Friday night against the Panthers. (Mitchell Thomas / Daily News)

The Panthers put the ball in the end zone again before half. Tyler Modlin took a jet sweep 10-yards into the end zone for the 13-7 lead.

Southside threatened after a 40-yard pass from Hundley Stallings was caught by Ty’Nahj Smith, but couldn’t punch it in.

On the 2nd half’s opening kickoff, a sky kick bounced off the turf and into the arms of a Panthers special team member at the Southside 25-yard line. Modlin then took in his second rushing touchdown from 12-yards out a couple of plays later.

“The touchdowns felt great. The holes were there and my guys blocked well,” Modlin said. “(Winning this game) is an accomplishment for the people that’ve come before me at Northside. It makes me feel good to make them happy.

On the ensuing drive, Stallings was strip sacked by Jon’Malik Foreman, but Stallings was injured on the play. He would not be able to return to the game. 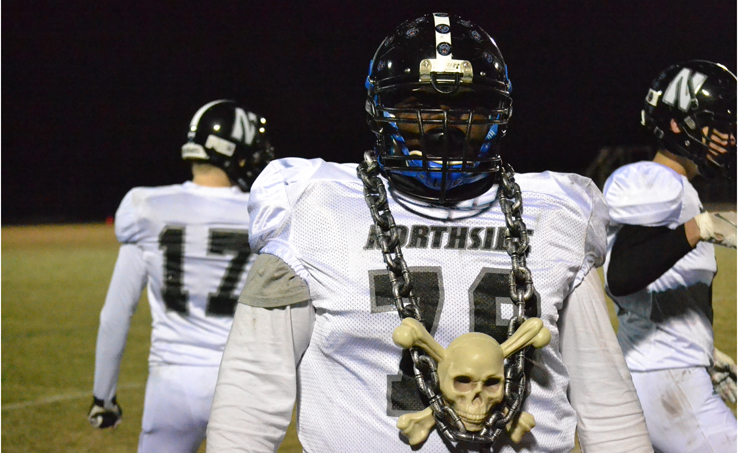 The Panthers took over in good field position again, capping off a three play drive with a 1-yard Gorham touchdown run.

Southside’s Walker Hill came into the game for the Seahawks and did a nice job, but on his first drive he forced a pass and it was intercepted by Payton Woolard.

The Panthers put together a scoring drive on the back of Gorham’s 35-yard touchdown run. 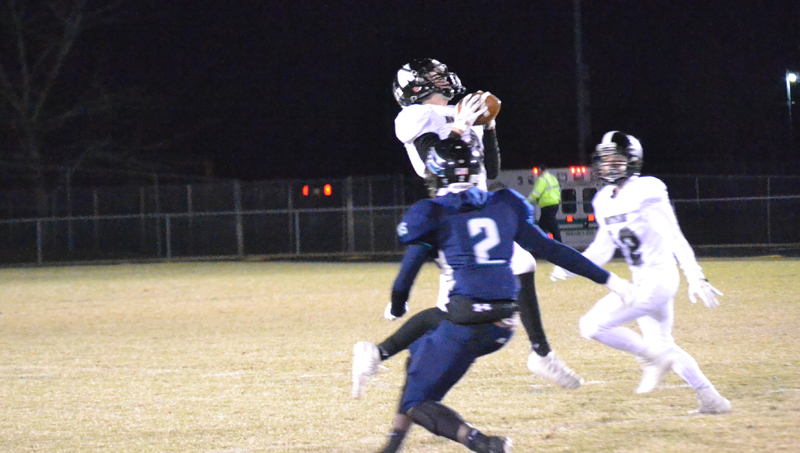 PICKED OFF: Northside defensive back Payton Woolard grabs an interception during the Panthers victory over Southside. He also recovered a fumble in the game. (Mitchell Thomas / Daily News)

“This feels good, I love scoring,” Gorham said after the game. “It means so much to win this game. That trophy staying at the North, that’s for sure.”

Hill drove his team down the field to score on the next drive, and Kenjray Coffield reached the end zone on a 3-yard misdirection play. 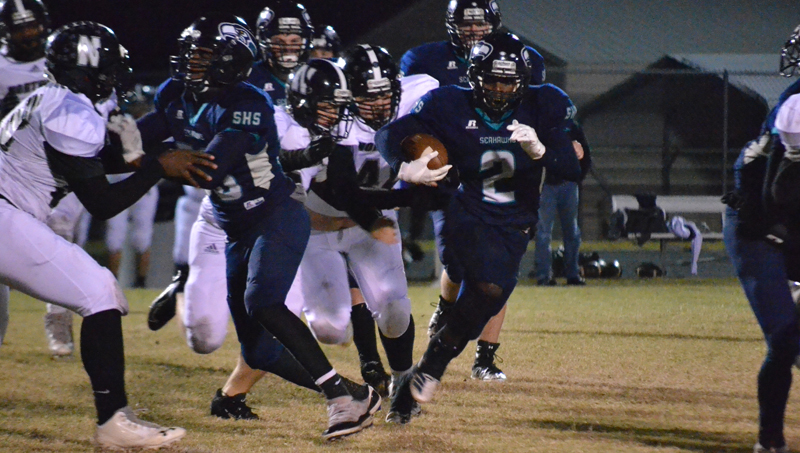 Southside attempted an onside kick but couldn’t recover. The Panthers moved the ball inside the five-yard line, and Zakkai Wilson rushed for a touchdown to increase the Panther lead to 41-13.

On the kickoff, the Seahawks fumbled again and was recovered by Woolard inside the Seahawks’ 10-yard line. Omari Crandell scored on the next play to cap the scoring for the Panthers.

“On the interception I knew they had been setting up the post-wheel all night. I was just waiting for it to happen and it was there,” Woolard said. “It felt good to get a couple turnovers for the team, put that turnover chain on and get everybody hype.

Southside’s Jaqwan Cobb took a 55-yard touchdown run into the end zone on the next Seahawks possession, but the game had been decided.

“I thought we played an OK first half. We missed some opportunities to punch it in to atleast tie it up going into the half. We couldn’t execute on short yardage. The second half kickoff was a big momentum swing for them and then Hundley getting hurt took a blow to the team,” Head coach Jeff Carrow said after the game. “We just didn’t put it together. Didn’t tackle well in the second half. We just need to play more consistently on offense heading into the playoffs.”

Head coach Keith Boyd was ecstatic to be able to bring the trophy back to Pinetown after the game.

“I thought we came out in that opening drive and did exactly what we wanted to do. Coach Carrow and those guys do a nice job, and were very prepared for our midline and double dive and covered it really well. We came out in that second half and that kick recovery sparked us. We started executing and firing off the ball. I was really pleased with the second half,” Boyd said. “It means everything (to bring home the Anchor Bowl trophy). This is a great, clean rivalry. We respect them, they respect us and it’s been back-and-forth here recently. We’re proud to be able to take it back to Northside.”

The latest update of playoff projections from HighSchoolOT.com will be released tomorrow. 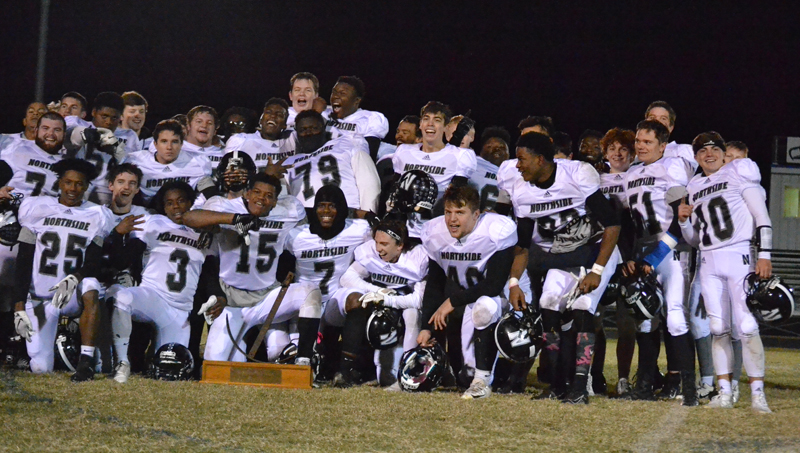 It wasn’t pretty, according to head coach Jon Blank, but it got the job done and the Washington Pam Pack are co-champions for the Eastern Carolina 2-A Conference.

Jaden Hambric had a big night for the Pack, scoring three times on the evening. Mykell Warren scored one time as well.

The NCHSAA awarded the Pam Pack for their accomplishments this season and earning a share of the 2-A Eastern Carolina Conference title.

Washington is a 2-seed and will host 15-seed Nash Central in the first round of the playoffs on Friday night.