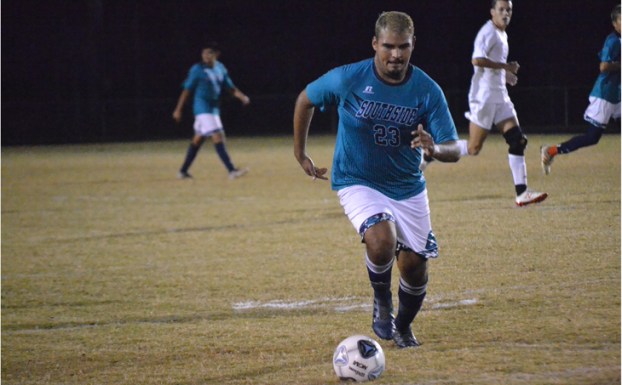 FOCUSES: Southside’s Johnathan Hernandez with the ball at his feet prepares to make his next move in the Seahawks’ second-round playoff game against Rosewood on Thursday evening. (MItchell Thomas / Daily News)

CHOCOWINITY — A hard fought battle that took three overtimes to decide resulted in Southside’s 3-2 loss to Rosewood on Thursday night in Chocowinity.

It was the second-round of the NCHSAA playoffs. Rosewood was coming off of a forfeit against Ocracoke, and with Southside’s first-round bye, they each played their first games of the tournament on Thursday night after both athletic directors agreed to do so.

In the first half, the only breakthrough came just past the midway point of the first half. Senior Johnathan Hernandez attempted a long throw-in that the Eagles keeper misread. He got a hand to it, but the ball deflected backwards into the back of the net for a 1-0 Seahawks advantage.

All was quiet until late in the second half. With 16 minutes remaining in the half, Rosewood got their equalizer from a scramble in the box. With four minutes left, the Eagles got a one-on-one opportunity with the Seahawks’ keeper that Rosewood sank into the corner of the net.

Just moments later, Southside earned a corner kick. Hernandez crossed it, the ball took a bounce, and Eduardo Gonzalez made an acrobatic play that sent the ball over the keeper’s head into the nylon for a 2-2 tie.

In overtime, the Seahawks threatened a couple of times, but Rosewood controlled the possession for the majority of time. They found opportunity with just two minutes remaining before having to move onto a penalty kick shootout. Southside’s keeper came out to make a play, but the Rosewood attacker lifted the ball over him and it nestled into the corner of the net for the Eagles golden-goal victory.

Southside accomplished many great things throughout the season, and head coach Jay Petty was the first to say that when he commemorated his senior class.

“I knew coming into tonight that we were going to be back-and-forth. Everything I’ve read and seen on these guys I knew it was going to be a slobber-knocker and that’s what it turned out to be,” Petty said. “It has been a wild ride (with the senior class). I love those boys and I sure am going to miss them next year. They’re one heck of a group of players. I’ve never had the privilege of coaching a group as talented as they are. My hats off to them, because they’ve done everything I have asked them to do and more.”

Jairo Juarez, senior attacker who scored his 100th goal on his career during his senior season said that this year was special.

“We were ready to go. It was a tough game. Props to them, they gave it their all. We did all we could and it just didn’t fall our way. It is what it is,” Juarez said. “The three-peat for conference was awesome, scoring my 100th goal was unbelievable, but playing with these guys was the most fun. Since freshman year and all the people I’ve gotten to play with, it has been an amazing experience.”