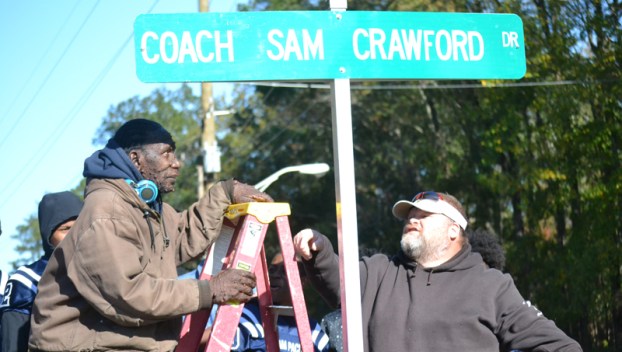 If there is one person that showcases what it truly means to have “Pam Pack pride,” that would be Washington’s coach Sam Crawford. He has been involved in all things Pam Pack since 1978. On Friday afternoon, all of the time he has devoted to the school he loves was put on display. Washington named the school’s main road “Coach Sam Crawford Dr.”

Football coaches, players, cheerleaders and decision makers that made this happened joined together at the entrance of the school’s road. Coach Sam was asked to help unveil the new street sign that was previously covered with a trash bag.

Unknowing of what was to come, Coach Sam climbed up the ladder and ripped off the bag, to find out the road was named after himself.

An emotional coach Crawford stepped down from the ladder, waved, thanked everyone and explained how much it meant to him.

“It’s a great honor. I love it. I had no idea what was going on today, but I am very blessed and very thankful for what happened here today,” Crawford said.

A couple weeks prior, Crawford underwent a successful eye surgery. Crawford was unable to attend Washington’s football game at South Lenoir that week, but the Washington community showered him with gifts for his return to the sidelines.

“I thank the community for standing behind me. I was very blessed to have that. I couldn’t go to the South Lenoir game but the football players took my jersey up there with them and all that,” Crawford said. “I’m just tickled to death about it all.”

After many pictures and handshakes, head coach Jon Blank spoke on how naming the road after Crawford was such an easy decision.

“This has been on my mind and in the works for the past couple of years now. When you think about honoring people that are great for your program, he’s the first one to come to mind,” Blank said. “It’s incredible. He cares about our kids and our program in all of our sports. He’s most known for being on the football sidelines but everybody knows him wherever we go. He’s probably my best friend every Friday night. We hug it up before every kickoff and every halftime. He’s an important part of everything we do.”

Crawford was also recognized at halftime for the road’s new name during the Pam Pack’s senior night, which turned into a 28-8 victory over the Greene Central Rams. 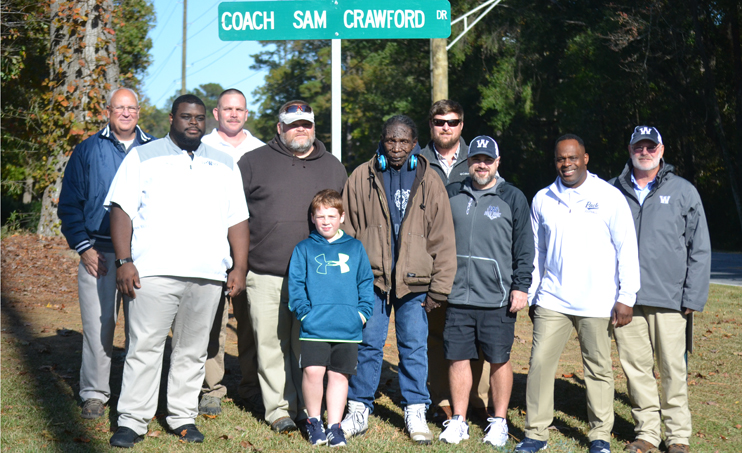 Northside 47, Southside 19 The Panthers are taking the Anchor Bowl trophy back to Pinetown. Northside improves their record to... read more