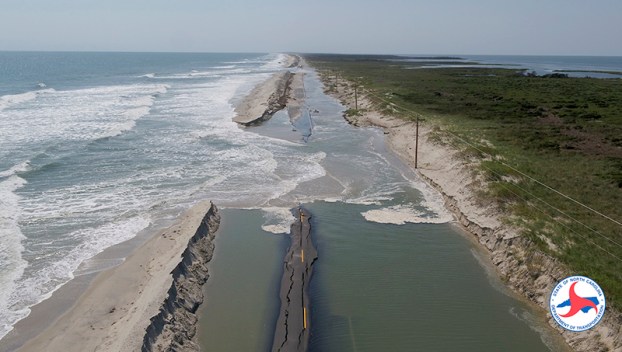 Ocracoke fundraising concert will go on, regardless of weather

Months in the making, the Music Across the Sound benefit concert for Ocracoke Island artists will go on, despite the nor’easter battering Beaufort County — and Ocracoke.

The Arts of the Pamlico-hosted benefit begins Saturday at 6 p.m. and features a lineup of local musicians performing on the Turnage Theatre stage, in addition to the theater’s gallery before the show and during intermission.

Though the headliners of the event, Ocracoke groups Molasses Creek and Coyote, had to pull out of the fundraiser because of the storm — and the cancellation of ferries to and from Swan Quarter and Ocracoke — the benefit will go on as planned. Local favorites Chuck Phillips, the Steve Creech Jazz Band, Squier Red & the Blues Band, Wayne Stoeckert & friends and more will brave the elements to put on the show, as will staff from Ribeye’s, Carryout by Chrislyn and Grub Brothers, the downtown restaurants providing appetizers for concertgoers. Beverages will also be for sale.

The Ocracoke groups will be at the performance in spirit, according to Torrence.

“The Ocracoke groups are sending a recorded video, ‘Waterbound’ it’s called, which is pretty fabulous, with before and after (Hurricane Dorian) remarks,” said Debra Torrence, executive director of Arts of the Pamlico. “We will make it work.”

Tickets to the Saturday night show are $20 or $22 if purchasing with a credit card. Arts of the Pamlico has a long history of supporting Ocracoke artists, and when the idea to raise money for Ocracoke artists was posed by former AOP Executive Director Joey Toler just days after the Outer Banks island was devastated by the historic flooding of Hurricane Dorian, the current staff began orchestrating the musical extravaganza to assist fellow artists. Since the Sept. 6 flood, the island has been closed to all visitors other than relief workers. As many rental homes are housing Ocracoke residents who lost their homes, and several of the island’s hotels also were flooded, the tourism season Ocracoke artists rely on to support themselves came to an abrupt and early halt.

Ocracoke is expected to experience more flooding from this weekend’s nor’easter, which could undermine progress made to rebuild sections of N.C. Highway 12 destroyed during the hurricane and open back up the island to visitors.

For more information about the concert, visit www.artsofthepamlico.org or call 252-946-2504. The Turnage Theatre is located at 150 W. Main St., Washington.

The toss of a coin, drawing names from a hat, the splitting of a turkey wishbone, a game of Washingtonopoly... read more