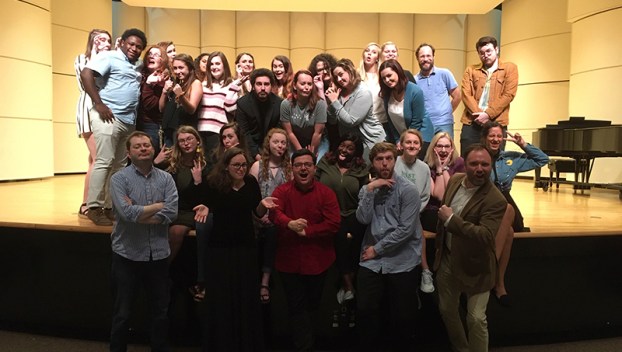 PRE-PERFORMANCE: Main players in the cast of “Hansel and Gretel” gather at a recent rehearsal of the opera onstage at East Carolina University. ECU School of Music’s Opera Theater will perform four shows of the classic fairytale this weekend at Arts of the Pamlico’s Turnage Theatre. (East Carolina School of Music)

The Brothers Grimm and students in East Carolina University School of Music’s Opera Theater program will take to the Turnage stage this weekend, performing the classic fairytale, and opera, “Hansel and Gretel.”

Starting Friday night at 7:30 p.m., continuing Saturday at 2 p.m. and 7:30 p.m. and again Sunday at 2 p.m., Arts of the Pamlico will host the family friendly opera production, the beginnings of a growing partnership between ECU and the Turnage, according to “Hansel and Gretel” costume director and AOP Players’ artistic director Jeffery Phipps.

Phipps said this weekend’s opera is a traditional take on the fairytale in musical form.

“It’s the opera version. It’s in English, and it’s by — and this is his real name — Engelbert Humperdinck,” Phipps laughed. “What’s unusual about this production is we have a chorus of children. They’re sort of like the backup singers in this production. They will be angels and forest animals and at the end they are gingerbread cookies that come to life — when the witch’s spell is broken, they come to life.”

As the AOP theater program, and the relationship between ECU and AOP, grows, Phipps said the plan is to merge local and ECU student talent together.

“This (the Turnage Theatre) is the opera’s performance space. We’re going to start incorporating them in everything we do,” Phipps said.

In the works for 2020 is a summer stock production, which will include one of the most popular musicals of all time, Rodgers and Hammerstein’s “The Sound of Music.”

“We’re calling it the Riverside Music Theatre Festival. What we want to do is offer to the public a musical, an operetta and an opera. It will be the School of Music and local talent. We want this to be something that people in Washington can not only watch as an audience member but also participate in the production as well,” Phipps said. “It could be performance or working backstage. We really want it to become something that will attract people in all aspects of theater and music.”

This weekend’s performance of “Hansel and Gretel, however, will see two casts so more ECU Opera Theater students will be able to perform live, on stage.

“It is double cast. So on one night you’ll see one cast of leads and another you’ll see another cast of leads,” Phipps said. “That way, more students will get opportunities to sing. Also, it’s less stressful on their voices.”

Tickets to “Hansel and Gretel” can be purchased for $20 cash/$22 credit card; $15 for seniors/ECU faculty and staff; and $5 for students. For more information, visit www.artsofthepamlico.org or call 252-946-2504. The Turnage Theatre is located at 150 W. Main St., Washington.

After a marathon day of canvassing and two recounts, the Washington City Council election was settled by drawing a name... read more