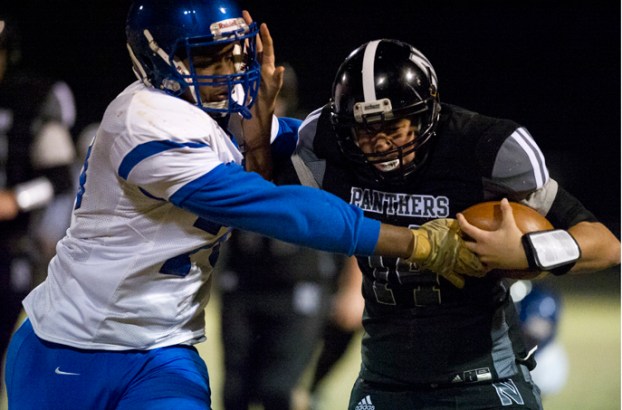 There are two electrifying match-ups this Friday night for Beaufort County football teams. This week, neither team can afford to make any big mistakes. The second-round separates the good teams from the great teams. The Washington Pam Pack and Northside Panthers are really good football teams, but they’ll have to prove their greatness for the 2019 season on Friday night.
No. 2 Washington vs. No. 7 Salisbury 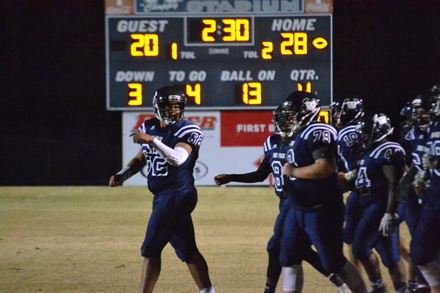 CLOSING IT OUT: Washington’s offensive heads back onto the field after a timeout. The Pam Pack converted a fourth down the sealed the win on the next play against Nash Central in the first-round of the NCHSAA state playoffs. (Mitchell Thomas / Daily News)

This has been a tough matchup to call. These two teams are talented on both sides of the ball, and it’s going to be a really fun matchup Friday night.

The most important aspect of this game will be how fast the Pam Pack can get going. After a few slow starts this season, they’ve been forced to battle back from deficits, and one of those was for the outright Eastern Carolina 2A Conference Championship at West Craven.

If Washington is firing on all cylinders, they have the capability of up putting up points in bunches against any given team. This year they scored the second-highest points per game average in school history (31 ppg).

However, the Salisbury defense is only giving up around 8.3 points per game this season. The Hornets have shutout five opponents on the year. The most points in a game they gave up was 35 to Oak Grove, the Central Carolina 2A Champions that were bounced in the first round by North Davidson 43-7. Hornets’ sophomore linebacker Jalon Walker has already gotten scholarship offers from North Carolina, Wake Forest and Duke. He will be a fun watch on Friday night, using elite speed and good instincts.

Offensively, the Hornets are pretty good. Not world-beaters, but good enough to compliment their stout defense. Vance Honeycutt, the quarterback, has completed 75-of-149 passes for 1104 yards, 11 TD’s and nine INT’s on the season. The vast majority of those yards are from wide receiver screens and good blocking, but Honeycutt still has an arm. He’s committed to the University of North Carolina at Chapel Hill for baseball.

Patrick Taylor is their leading receiver with 35 catches for 559 yards and seven TD’s. The Hornets’ ground attack is led by junior Mike McLean, who has 164 carries for 1,185 yards and 13 TD’s.

The Hornets offense is eerily similar to that of D.H. Conley’s. They spread out the defense with three or four wide receivers and like to run read and speed options with Honeycutt and their stable of backs.

As much as I’d like to pick the Pam Pack here, their slow starts concern me. If they come out ready to play, it’s a different story. For now, I think Washington’s comeback bid will fall short.

No. 5 Northside @ No. 4 Northampton County

The Panthers have played relatively well all season. If it weren’t for a few turnovers in big moments, the Panthers could just as easily be a 10-win ball club.

However, that’s the way the ball bounced, and the Panthers will have a two-hour bus ride to Gaston on Friday night.

Northampton deserves credit for finishing second in the Tar Roanoke Conference, but after the top two teams in the conference, there’s a significant drop off in quality teams. The Jaguars have only faced three teams over the course of the season with a positive record, and they have lost decisively to all three.

The Panthers have found an offensive rhythm the past two weeks. They scored 47 against Southside and 42 against KIPP Pride last week in the first round.

Northampton got a first-round bye, and Northside got to continue their recent roll, and that bodes well for the Panthers.

If the Jaguars come out flat, the Panthers will pounce. Northside got away with two turnovers in their own territory last week, but it didn’t come back to hurt them.

The Panthers defensive line has done a really good job of containing the run, and they’ll have to do that again against a Jaguars team that has rushed for 3,304 yards this season. Statistically, the Jaguars only throw the ball 14% of the time. They’ve completed 20-0f-56 passes on the season for 489 yards for seven TD’s and 7 INT’s. Northampton has rushed 408 times this year.

The Panthers aren’t going to be challenged through the air much, and that matchup plays in the favor of Northside. They will roll into the third-round after Friday night, likely to play against a really good Rosewood team in Goldsboro.

Up next for Beaufort County football playoff teams

The second-round of the NCHSAA state playoffs are on the slate, and two Beaufort County teams are still alive in... read more