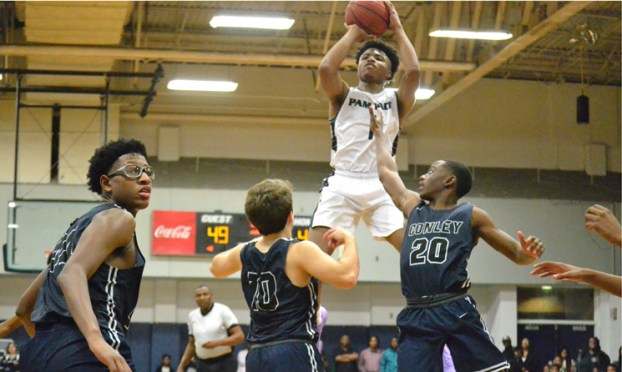 HIGH-RISER: Washington’s Omarion Blount gets above the defense and sinks a shot in the Pam Pack’s double-overtime win over D.H. Conley on Tuesday night. (Mitchell Thomas / Daily News)

Senior point guard Rashod Smith also made his Washington basketball debut, and he got off to a scorching start. He scored 15 points in the first quarter, including four, 3-point buckets. After wearing a Northside jersey for the past three years, Smith said it was different having another home gym.
“It feels a little weird (putting on a different jersey), but I’ll adjust to it,” Smith said. “My three ball was working early on, my dribble drive, passing and getting my teammates involved. I had a hot first quarter but then kind of cooled down. I just got to play better defense. I have to actually slide my feet and stay out of foul trouble.” 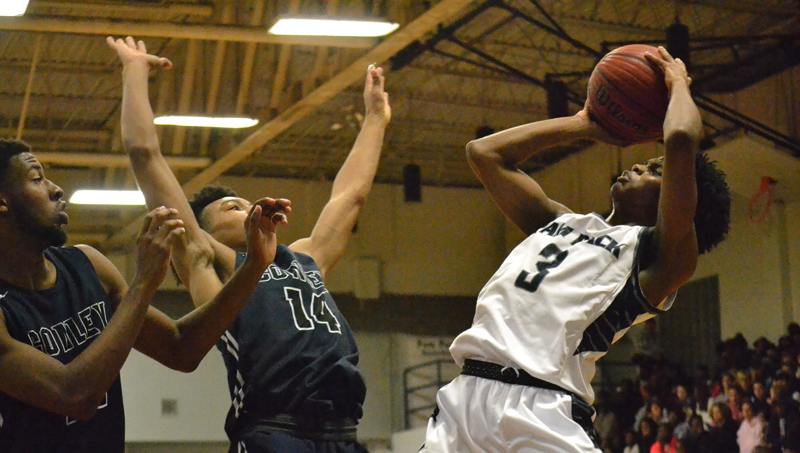 LEAN BACK: Washington’s senior point guard Rashod Smith contorts his body to get a shot off against Conley on Tuesday night. Smith finished with 17 points. (Mitchell Thomas / Daily News)

Washington scored 21 points in the first quarter, the most of any quarter in the game. Conley went on a 16-3 run to open the second quarter and take the lead, but Omarion Blount and Kash Godley scored the final five points of the frame to cut the deficit to 29-28.

A very defensive second half followed. Washington’s defense switched up multiple times throughout the course of the game. They started off in man-to-man and switched to zone to take away the middle lane. Conley made a living off of its flex offense, passing the ball at the top of the key with moving pieces until a lane opened up. Allewalt said the switch made Conley work a little harder for their buckets, and the Pam Pack closed out on the perimeter shooters well enough in the second half to keep Conley at bay.

At the end of the third quarter, the score was 41-apiece. Each team scraped and clawed for every bucket. With 33.3 seconds left in the fourth quarter, Jaumari Bryant stepped to the line for a one-and-one. He sunk both freebies to tie the game at 49-49 and head into overtime.

Sophomore Messiah Ebron stepped in on the defensive end and disrupted the Vikings offensively, which led to him scoring a couple of big-time shots late in the game. With 38 seconds left, down by three, Ebron drove into the lane and laid it up through some contact. A miss on the front end of Conley’s free throws gave Washington’s fans life. Blount was fouled heading to the basket, and he drained both free throws to send the game into double-overtime. A raucous crowd rattled the gym after every made bucket. 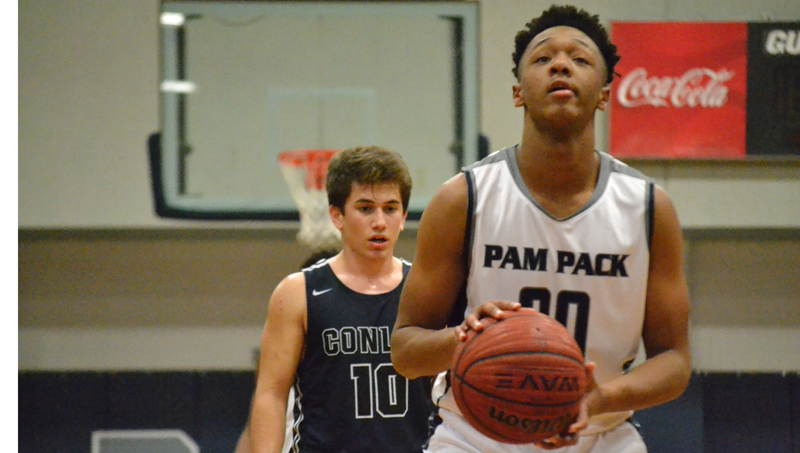 In double-OT, the Pam Pack stepped on the accelerator and flexed their depth advantage. Ebron scored eight points in overtime. Blount finished with 13, Justin Powell picked up 11 and Bryant collected 12 points on the night. 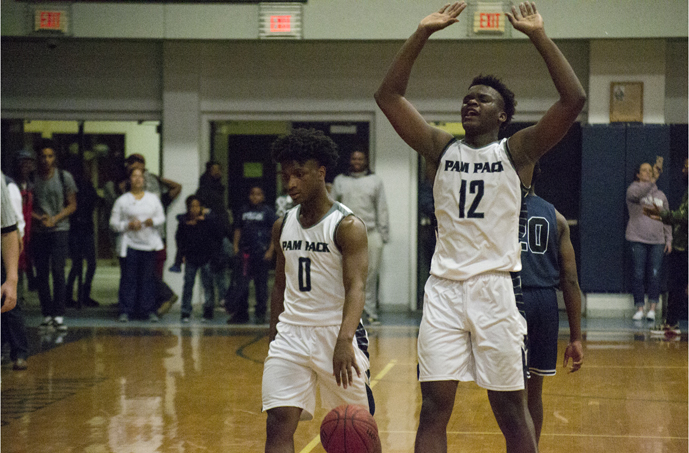 “We didn’t win but three four quarters last year as a team. We knew leading up to the season that conditioning was going to be super important for us, and we did a lot of that leading up to our first game. I think it made a difference tonight, I though Conley got a little tired and we took the game over,” Allewalt said. “Messiah came in and did a really nice job. His intensity level on the defensive end kept everybody engaged. He made a really big difference tonight in closing this game out. When both of your point guards foul out, somebody has to step up. Not having Rashod last year, these guys never panicked when he went out. They knew where to go to be successful and it worked in our favor tonight.”

The Pam Pack will be back in action next Tuesday evening, Dec. 4 with a rematch against Conley, in Winterville.

There is a considerable amount of talent in the Beaufort County area. In volleyball, there were two teams to make... read more