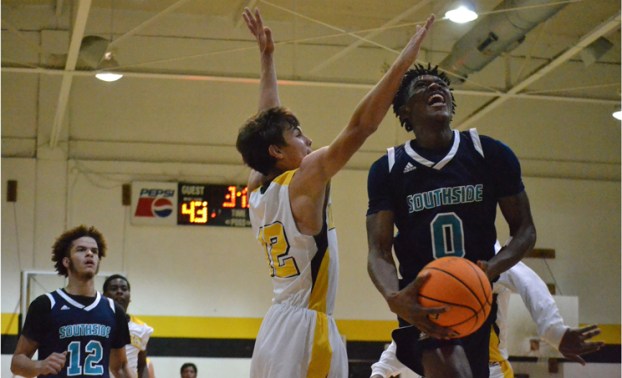 JELLY: Southside’s Ty Smith darts down the court after a turnover and spins the ball off the glass and in for the and-one opportunity in the Seahawks’ 75-40 victory over Mattamuskeet. (Mitchell Thomas / Daily News) 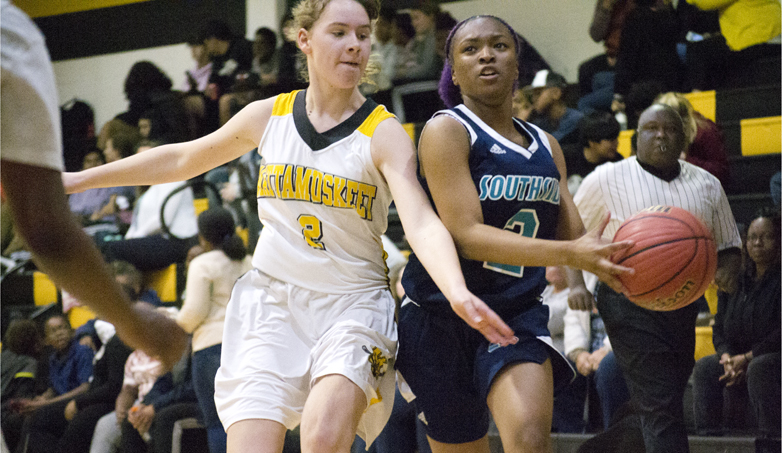 DRIVING BASELINE: Southside’s Kejasia Midgette runs by her defender along the baseline in the Lady Seahawks’ 57-8 win over the Lady Lakers on Monday night. (Mitchell Thomas / Daily News)

Buckets were abundant early and often for the Southside girls basketball team on Monday evening. The defense forced turnovers and capitalized to build an early lead, and sustained it for their first win of the season.

The Mattamuskeet girls’ basketball team revamped its program after a two-year hiatus, playing their first game on Monday night.

Southside’s (1-1) Jasmine Blango led the Lady Seahawks with 23 points. The vast majority of those points came in the first half. 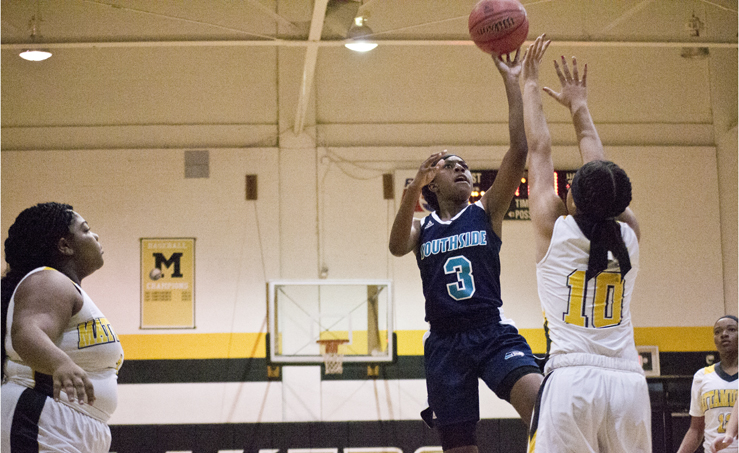 FRESHMAN: Southside’s Ka’Niyah O’Neal made a huge difference in the Lady Seahawks win over Mattamuskeet. She put up 18 points in just the second game of her high school career. (Mitchell Thomas / Daily News)

Ka’Nyah O’neal was the culprit of many Mattamuskeet turnovers in the first half, turning in an 18-point performance Monday evening.

Southside’s defensive pressure put the Lady Seahawks in position to begin the game on a 41-2 run, and cruised the rest of the way.

“That’s the type of game you just have to stay focused. It was a tough game, but we didn’t need to lose focus and start moving backwards. We need to keep this momentum moving forward,” Southside head coach Milton Ruffin said after the game. “We’ve been talking about defense. If we can continue to play like that then we’ll have a chance. I think we can score the ball, but I think we need to continue to improve our transition defense.” 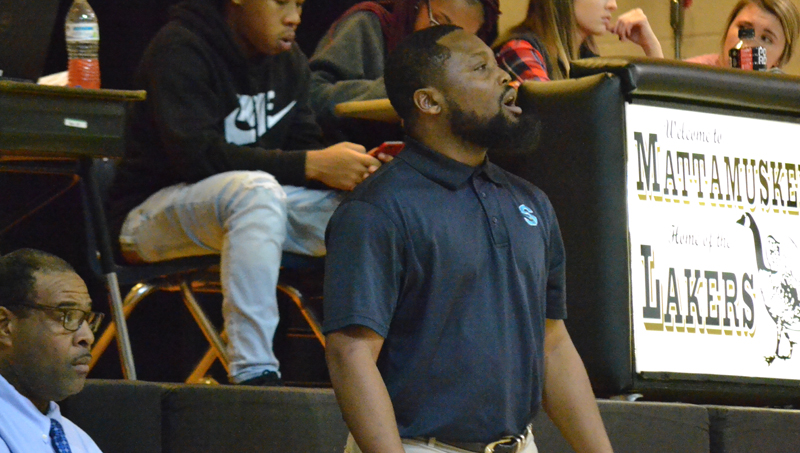 “It feels pretty good,” Whitney said about his first win as head coach. “Tonight, basically, we just had to find our rhythm. Just like our first game of the season we couldn’t get any shots (to fall) in the first half. Eventually, they got the feel of it and shots started falling. Our defense forced turnovers, and those turnovers led to points.”

From the jump, Southside (1-1) was on the attack. They got on the board first and never trailed in the ball game.

Southside’s transition offense was working well, using their size advantage to grab defensive rebounds and push the ball down the court quickly.

When the Seahawks set up their offense, they found the gaps in the Lakers’ zone defense and moved the ball well. In the second half, a lot of the shots that weren’t dropping in the first half, connected.

Senior guard Zach Green led the Seahawks with 16 points, 6 rebounds and four assists on the night. 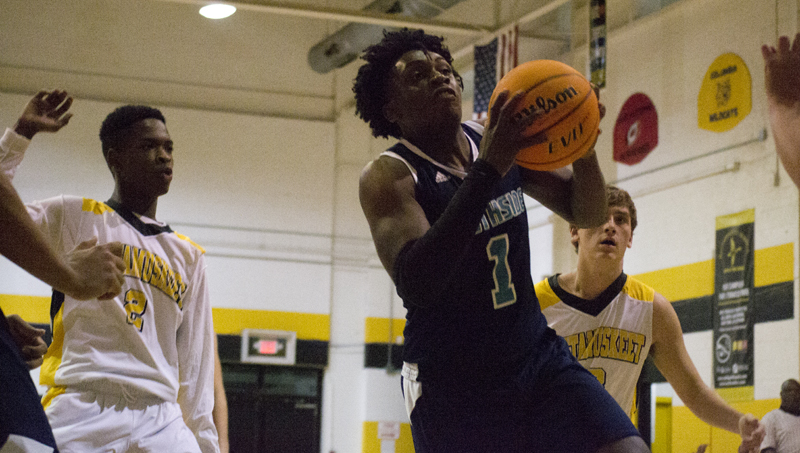 AND-ONE: Senior guard Zach Green fights his way to the basket and earns the hoop and the harm in the Seahawks’ victory Monday night. (Mitchell Thomas / Daily News)

“It feels good to get that first win,” Green said. “We just have to continue working on our defense, rebounding, playing as a team and communicating. We did a good job tonight of getting the ball in the middle and communicating, but there’s still a lot to improve on.”

Junior forward Nehemiah Worsley hauled in a double-double performance with 16 points, 14 rebounds and pick-pocketed the Lakers four times on the night. 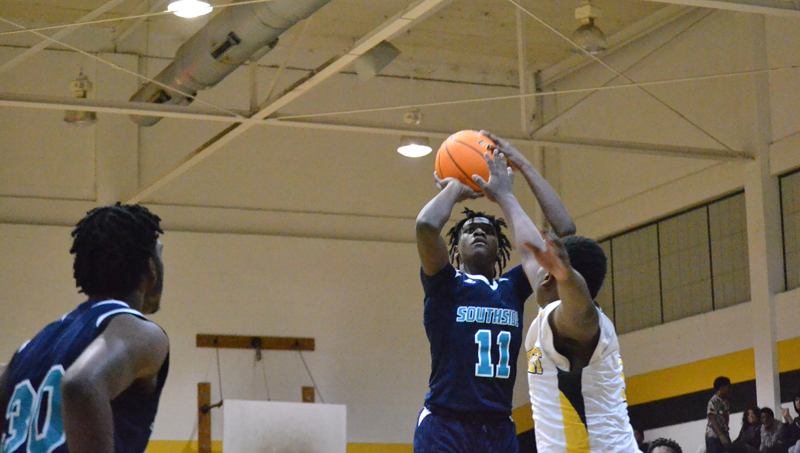 RISE-UP: Junior forward Nehemiah Worsley pulls up from the elbow and drains a shot in the Mattamuskeet defenders beak on Monday evening. (Mitchell Thomas / Daily News)

“(Croatan) is a team we can beat,” Whitney said about the Seahawks’ next opponent. “The first time we went down there we were coming off three days of practice, but that’s a team we can beat. Our football players are getting their basketball wind in, because football conditioning and basketball conditioning are completely different. We just need to work on our defense and continue scoring points.”

Both the Southside girls and boys will face Croatan Wednesday evening. First tip is set for 6 p.m.

Many of the area soccer teams found success this past season. While Southside and Washington both made the 32-team field,... read more