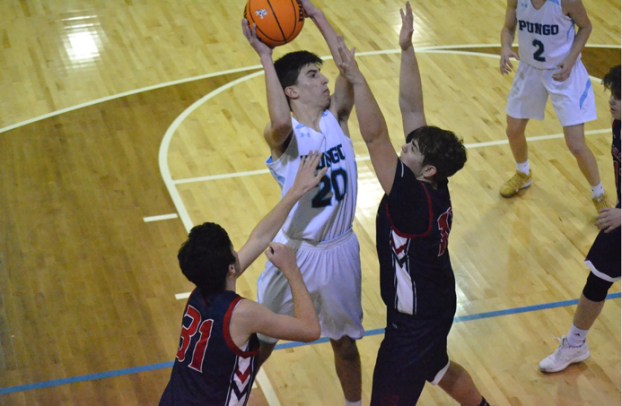 HOOP AND THE HARM: Pungo Christian Academy’s Wilson Sawyer gets fouled and makes the bucket for an and-one opportunity in the Raiders’ 73-31 victory over New Life Friday night. (MItchell Thomas / Daily News)

A disruptive defense led to many New Life turnovers, and the transition baskets added up during the Raiders victory.

After having three consecutive 20-point performances, Miller Lee had a quiet night at Epiphany, but bounced back with a 21-point output against the Warriors Friday evening. Lee also had seven swipes, three assists, three rebounds and a block.

Head coach Mart Benson was happy his team bounced back after an underwhelming performance the night before.

“We had a really tough night (Thursday) in New Bern against Epiphany. Things didn’t go well at all,” Benson said. “Tonight I think they decided that they were going to come out and play together and that’s what they did. Our half-court defense is pretty good, but our full-court press did not show up well at all, we definitely have to work on that. Offensively, I think we have to work on moving the ball some, but other than that I think our defense has been really solid.”

Wilson Sawyer knocked down seven of his eights shots in the contest, including a free throw to give him 15 points on the evening.

“(Thursday night) was rough. We had like 20-something turnovers and didn’t do anything offensively but we all had a better mindset coming out onto the court today,” the senior, Bishop said. “We were definitely a little more confident. The defense played great, I think we forced atleast 15 turnovers. We played excellent on defense and luckily we got the offense going, too.” 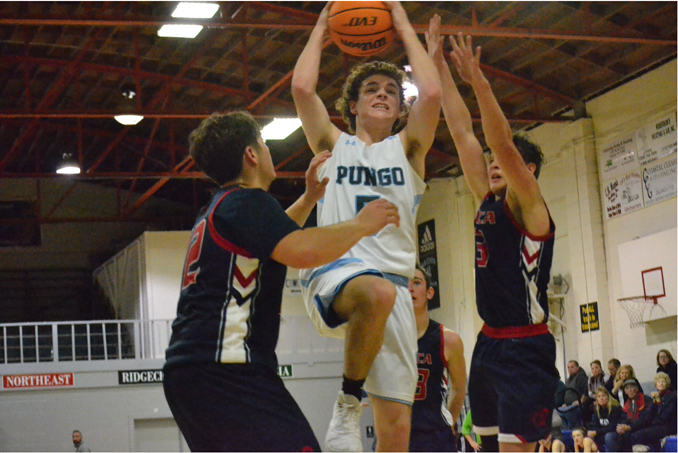 BETWEEN DEFENDERS: Pungo’s senior guard Ryan Bishop glides between defenders and lays the ball up off the glass in the Raiders’ victory over New Life Friday night. (MitchelL Thomas / Daily News)

The Pungo defense got 18 steals on Friday night, not including the unforced Warrior turnovers.

Coastal North Carolina HomeSchool will come into Belhaven on Thursday evening to face the Raiders in their last contest before Christmas break. Tip-off is set for 7 p