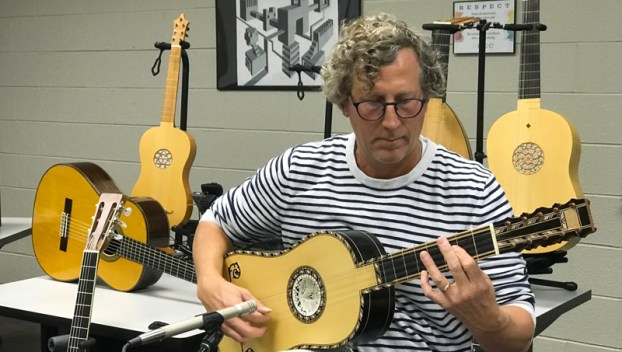 STRUMMING WITH SOUL: Local musician Dave Reynolds’ new album, “Welcome Home,” features a blend of tracks dedicated to Washington and the Pamlico River, as well as songs about a personal journey to discover his roots. (James Casey)

It’s partially a tribute to Washington and the Pamlico River, partially a celebration of heritage and family. But above all, local musician Dave Reynold’s newest CD, “Welcome Home,” is a story of self-discovery.

“It started when I decided to write a little bit about my heritage, to find out where I was from,” Reynolds said.

Growing up in a military family, Reynolds had lived in locations throughout the country, not entirely sure of his roots. After moving from California to Washington with his wife, Libby, three years ago, he began exploring his background more thoroughly. It was then he discovered that some of his ancestors had actually immigrated from Bern, Switzerland to New Bern long ago.

“We realized that we had actually moved, unknowingly, to a place where a lot of our ancestors had immigrated to,” Reynolds said. “It’s also the case on my wife’s side of the family as well, so I decided to compose some music about that journey and about the town of Washington.”

One track, “Festival Park,” reflects the good vibes Reynolds feels when he passes by or stops to hang out at park on Washington’s waterfront. Another, “Havens Mill,” honors the historic structure that greets visitors as they come into town over the U.S. Highway 17 Bridge.

To bring the album to life further, Reynolds is working with local photographer Ric Carter to put together a multimedia presentation of images and music. The images will focus in on people and places in Washington. Carter also designed the cover art for the CD.

Reynolds will play some of the songs from “Welcome Home” at the Harbor District Market in Washington this Saturday from 9 to 11 a.m. He also will have copies of the CD available to buy. To hear some of the tracks, and read more on the inspiration behind the album, visit www.thedavereynoldsproject.com.