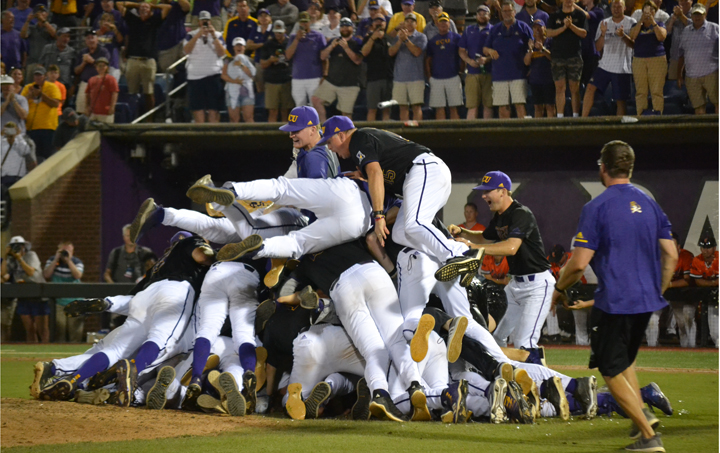 DOG PILE: DOG PILE: The East Carolina Pirates pile up after winning their own regional at Clark-LeClair stadium on June 3 of 2019. They defeated the Campbell Camels 10-3 and 12-3 in two must-win games. (Mitchell Thomas / Daily News)

In the last week of 2019, the Washington Daily News will run a recap of the Top 5 sports stories of the year that have created conversation or most affected the community. The No. 3 story on the list is East Carolina’s regional victory after losing the opening game.

GREENVILLE — The East Carolina Pirates defied the odds back on June 3. After losing the first game of the regional, they won four-straight games in a two-day span to win their own regional for the second-time in school history. It’s the first time they won a regional after losing the opening game. The Pirates defeated the Campbell Camels, 12-3, to advance to a super regional series in Louisville.

With a raucous crowd energizing the team, the Pirates scored early and often. Following the opening game of the regional, ECU outscored its opponents 44-9 in the final four games.

“I’ve coached at a lot of places. I’ve won regionals at places, and there wasn’t a better atmosphere than there was tonight in Greenville, North Carolina,” head coach Cliff Godwin said after the game. “In the fall we were trying to find our identity … it wasn’t the right culture. When we started 8-5, it was all about getting closer to one another. If these guys weren’t as close to each other and didn’t love one other the way that they do, we wouldn’t be able to do what we did this weekend.”

The Pirates jumped out to a 5-0 lead in the first three innings. Alec Burleson hit an RBI-ground out and Spencer Brickhouse laced an RBI-double down the right-field line in the first. A throwing error scored Bryson Worrell and Thomas Francisco in the second, and Brickhouse’s home run to right-center in the third added to the lead.

The Camels cut their deficit to 6-3, but ECU stomped on the accelerator in the seventh and eighth innings to put the game out of reach.

In the eighth, Dusty Baker hit an RBI-single down the right-field line to score Turner Brown, and Brickhouse doubled again to score Burleson and Baker, collecting his third and fourth RBIs on the evening.

“We didn’t have a doubt in our mind,” Bryant Packard said. “All we had to do was take it one pitch, one game at a time, and I think we did a really good job of that. We battled through a lot of adversity, people were banged up, but it didn’t matter, we put everything on the line for Pirate Nation.”

Jake Kuchmaner started the opening game of the regional and was pulled in the second inning against Quinnipiac. He got a chance for redemption in the sixth inning against the Camels. He received the win, and only surrendered one hit in his 3.1 innings of work. He was replaced in the ninth inning with one out, and got a chilling ovation from the crowd.

Following the final out, a dog pile formed at the pitcher’s mound. Pirate fans celebrated, danced and sang while the team darted to “The Jungle” in the outfield to high-five all the fans.

“It just felt like us and the crowd. It was just all against whoever was in the box or on the mound for Campbell,” Burleson said. “The dugout did a really good job of getting the crowd into it, the players on the field, and even coach Godwin.”

The Pirates went on to play Louisville in the super regional, where they were defeated two days in a row to end their season. The Pirates will begin their baseball season in 2020 with a home series against William & Mary on Feb. 14-16.