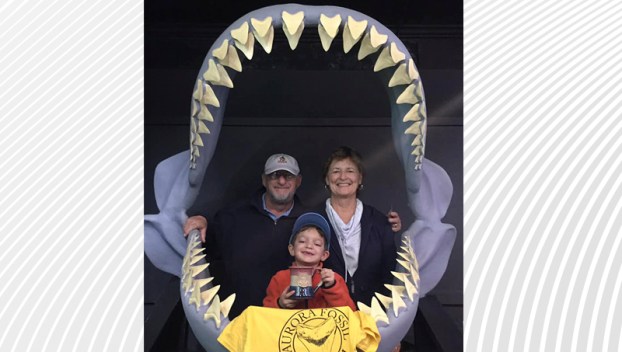 AURORA — A goal of bringing 19,000 visitors through the doors of the Aurora Fossil Museum in 2019 might seem like a tall order, but with one special visitor coming to the museum Monday, the organization exceeded its annual goal by more than 3,000 people.

The 22,000th visitor to the museum for the year was a young man named Grayson, who paid a visit with his grandparents, both of whom live in Chocowinity.

The highest visitor count to the museum came in 2009, when 24,717 people visited the Aurora hotspot. Crane, who has been director at the museum since 2014, says she has seen a steady increase in visitor count, which is up by 8,000 people since 2014. Moving forward, she hopes to see that trend continue.

“Our positive increase has not only been from the efforts of museum staff, board and volunteers, it has also been through a community (local, regional, statewide and national) effort,” Crane wrote. “Everyone who has visited and/or shared information about the museum has contributed to this number. We greatly appreciate and thank everyone for their support!”

For 2020, the museum will have a goal of 20,000 visitors, but there’s also a lot in the works for the coming year. For the first time ever, the museum will take on organization of the annual Aurora Fossil Festival, and volunteers are needed for the effort. In addition, there will also be a new membership option available for museum supporters starting in January.

To keep up with the latest from the Aurora Fossil Museum, visit www.aurorafossilmuseum.org, or find them on Facebook @aurora.fossil.museum. To sign up for the Fossil Museum newsletter, text the word “FOSSIL” to 22828 and follow the prompts.

The top story of 2019 is the fatal animal attack in Pantego that killed 77-year-old teacher Brenda Hamilton and the... read more