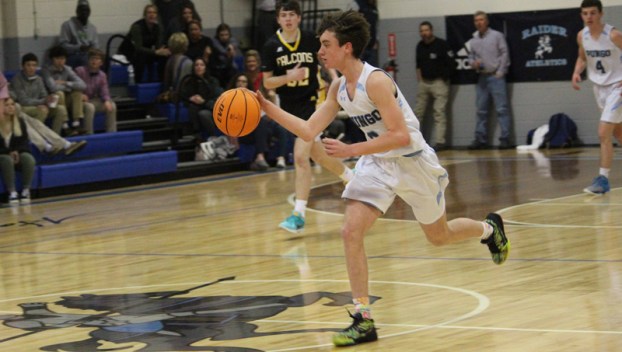 Pungo boys get revenge on Epiphany

Using stifling defense to their advantage, the Raiders took down the Falcons on Wednesday. They’ve now won five of their last six games since that 22-point loss to the Falcons last month.

“That loss definitely motivated them to play better the second time around,” Raiders head coach Mart Benson said. “We did a good job defending them and we had spurts when our offense was working well. They’re a great team and they wouldn’t go away even when we were making our outside shots.”

The Raiders had a tough time containing senior forward Joe Chrise as he paced the early offense for the Falcons. However, the opening quarter was fast paced and no team could find separation. Epiphany led 12-10 going into the second before going on a 7-2 run to open up a lead.

Pungo was able to answer with a big run of its own just before halftime. Pungo trailed 19-12, midway through the second quarter before hopping on a 14-4 run to close the quarter. Junior guard Miller Lee made three jump shots in that run putting the Raiders up 28-23 at halftime.

“That atmosphere was a lot different,” Lee said after his 26-point performance. “Tonight was all about seeing the floor and finding open spots. I took good shots and made sure my teammates also got good looks.”
A 5-0 run to start the half gave the Raiders a 33-23 lead with 4:27 left in the third quarter. The Falcons responded with a 7-1 run that cut the Pungo lead to four. After a back and forth exchange, senior forward Brent Benson hit a three to give the Raiders a 43-35 lead going into the final quarter.

“We wanted to avenge that loss,” Benson said after scoring 19 points. “There were too many turnovers on our end in the fourth quarter, but both teams played really hard. They played six guys, so they did a great job hanging in there. Miller helped us a lot with his ball handling and we made our shots down the stretch.”

Epiphany had cut the deficit to four points multiple times in the final minutes. Pungo struggled to close the game at the free throw line, giving the Falcons one last chance to steal the game. However, Lee was able to break the press for a layup that put the game out of reach with less than a minute remaining.

Pungo is back in conference action Friday when they host Lawrence Academy. The girls’ game begins at 6 p.m. and the boy’s game will follow.

After the Northside girls’ basketball team came up short at Cape Hatteras, the exact opposite took place a week later... read more