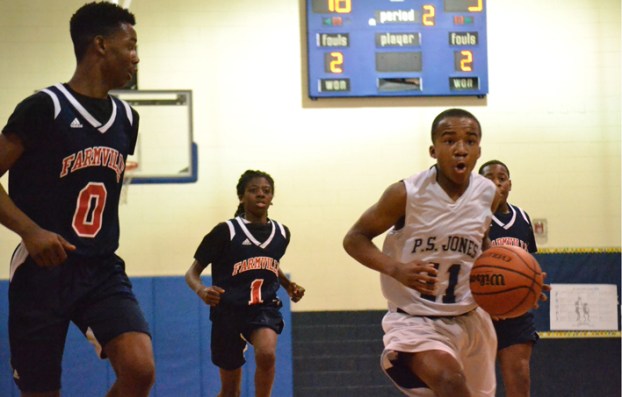 OUT FRONT: P.S. Jones’ Jayden Lampkins gets ahead of the defense for a basket during the Demons’ 48-39 victory over the Patriots of Farmville Middle School on Thursday evening. (Mitchell Thomas / Daily News)

The Demons didn’t waste any time getting started, as they jumped out to a 10-2 lead and never trailed in the contest.

Early on, Lampkins was seeing the floor well, dishing out four assists in the first quarter. He went on to have nine total assists and 19 points on the evening.

“We were just executing the plays, and my teammates were playing well on defense tonight,” Lampkins said after his near double-double performance. “We just need to work on a couple more things and we’ll keep getting better before the season’s over.”

Gary Payne was a force on the boards. He brought down well over 10 rebounds in the contest, and was key in pushing the ball up the floor in transition. 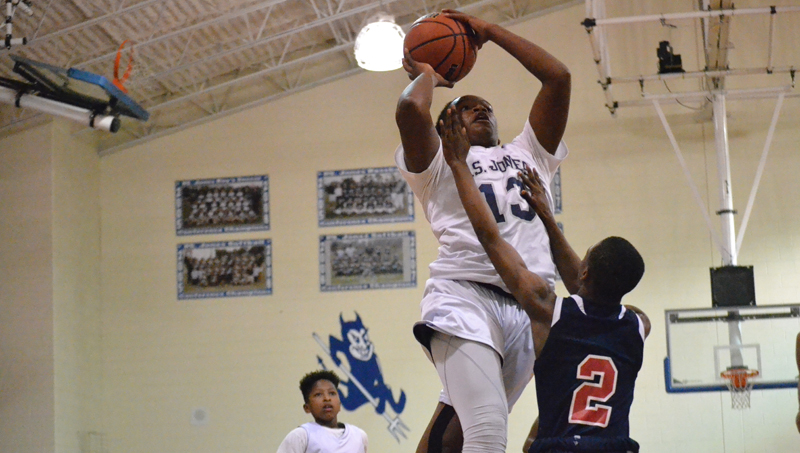 FINISH: P.S. Jones’ Gary Payne drives through the lane and finishes at the rim for a bucket in the Demons’ win over Farmville. (MItchell Thomas / Daily News)

Josh Gordan, Dezion Horton and Gary Payne all defended at a high-level. They crashed the middle of the floor when Farmville drove to the basket, and easily out-rebounded a Patriots team that had the length advantage.

“We implemented a new defense. Pitt County schools are always going to be bigger than us, but no matter how big you are with this defense, it’s going to be hard to use that to their advantage. So, that slowed them down and kept them in front of us,” Demons’ head coach Marcus Freeman said.

“He just comes to play. He has fun, wants to get his teammates involved, and when he gets them involved, so is he. He’s very fun to watch and has a very bright future ahead of him,” Freeman said.

In the second half, the Demons just kept applying pressure. Every offensive possession had a purpose and they limited turnovers throughout the whole night, making it difficult for the Patriots to keep up.

Horton had eight points for the Demons. Gordan added six points, while Jarryn and Gary Payne picked up five apiece. 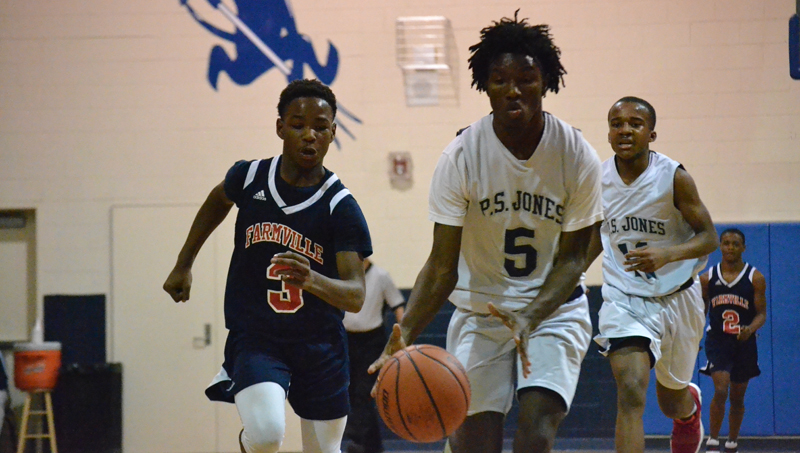 FAST BREAK: Demons guard Josh Gordan gets ready to put the ball up before being fouled on Thursday night against the Patriots of Farmville Middle. (Mitchell Thomas / Daily News)

P.S. Jones will be back in action Monday evening against a tough Hope Middle School team. The girls’ game will tip-off at 4 p.m. and the boys’ game will follow.

Southside’s boys and girls’ basketball teams are back on track after winning games on consecutive nights. The girls defeated Mattamuskeet... read more