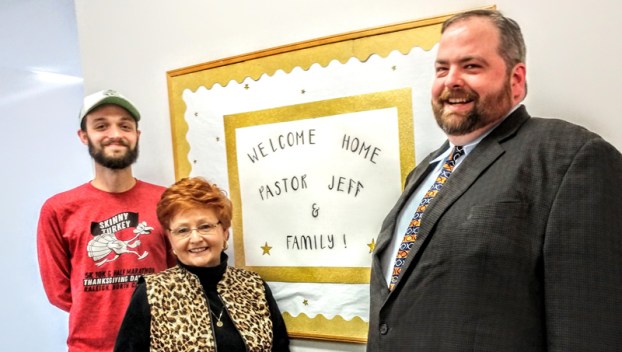 HOMECOMING: Peace Chapel Free Will Baptist Church pastor Jeff Necessary, right, received a warm welcome from his congregation, which sought to make him feel at home in his new post. He is pictured with search committee member Timothy Evans, and Peggy Edwards, who came up with the idea for the “welcome home” sign. (Karen Thiel)

“Welcome Home Pastor Jeff And Family” has been the message on the sign in front of Peace Chapel Free Will Baptist Church for several weeks. It begs the question: what does this mean? Did he just return from the hospital? A missionary trip? A well deserved vacation?

None of these. That greeting is the idea of congregant Peggy Edwards who, upon first entering Peace Chapel after leaving another church, “felt like I had just come home.” Six years after that stunning day, she wanted the same sensation to wrap its arms around Rev. Jeff Necessary, who became Peace Chapel’s newest pastor just as his calendar pages turned to 2020.

Edwards initially expressed that happy sentiment inside the church building, after she was asked to design a new bulletin board message near the community room.

“It was January but I didn’t want to use snow pictures,” she laughed. “I had heard him preach (as a candidate for the post) and the thought that came to me was ‘how would he feel coming here new?’ He wasn’t home yet… but I felt like he was our pastor from day one.”

The idea to take that greeting to the street was carried out by search committee member Timothy Evans, who has been a member of Peace Chapel since 2012, and on the pastoral search committee since last July, after former pastor David Thompson resigned.

“We had interviewed about six candidates by the time we spoke to Jeff in late October,” Evans said, “and after our first conversation, all of us were like ‘this is it, this is the future of our church.’”

Necessary preached his “try out” sermon on Thanksgiving weekend. His topic was “The Qualities of a Pastor — a Shepherd’s View.” Necessary told the congregation that the shepherd of any flock — four-legged sheep or two-legged congregants — must be God’s reflection on earth to feed, protect, heal, guide, and, if needed, rescue those he’s been given to tend.

He has a lot of experience with that. The married father of two sons, Necessary says he accepted Jesus as his savior at 8 years old, and knew he was supposed to be a pastor by the time he was 10. He resisted for the next five years because his father died two years after accepting the very same calling. Necessary wanted to live long past his late teens. But “the call was too strong. I answered it at church camp when I was 15. If it meant I was going to die, then so be it.”

That nightmarish thought never materialized. He’s been actively involved in some sort of ministry ever since his mid-teens, right through the rigors of three advanced degree programs as he cared for the flocks he led along the way. He said his dreams for Peace Chapel will mean fuller life for more than the congregants who are just getting to know him. “More community engagement” is the short version of this part of his vision for this flock.

Invoking the memory of his father, who often took food off his family’s table to give to someone who was homeless and hungry, Necessary said “that’s when I knew God was providing a way for us to reach out to the community… and I want to do that here. We can be channels of grace, in practical ways, and not just to people in the community who look like us.”