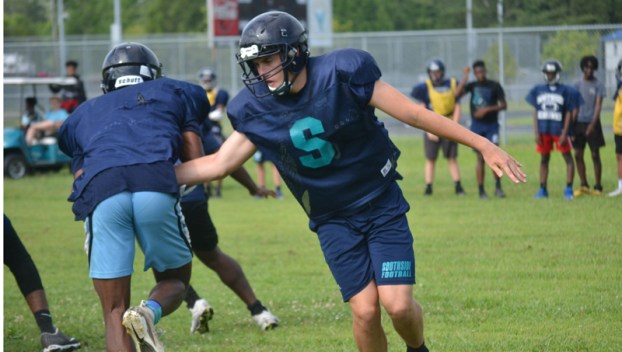 NON-CONTACT: Southside quarterback Hundley Stallings gives the ball to a running back in a summer practice prior to the 2019 season. The North Carolina Football Coaches Association has been debating about whether non-contact practices will help prevent concussions. (Mitchell Thomas / Daily News)

New rules and visits with legends of the game

I would like to applaud the Eastern North Carolina Football Coaches Association and the North Carolina Football Coaches Association for recently trying to help make football better in our state. At both clinics the organizations held — one in Greenville and the other in Greensboro — there were clinicians that spoke on all topics that relate to football. At both, there were college coaches who spoke and high school coaches speaking about drills and fundamentals to help make football better.

The concussion protocol was a big topic at both clinics. Knowing that numbers are down statewide, I feel as though there will not be as much contact in practices as in the past. I heard coaches urge others to limit the contact in practices and maybe even practicing in shorts during the year. This will definitely limit the contact and keep our athletes free from concussions. Mack Brown spoke about this and encouraged coaches to limit the risks, like they do at University of North Carolina. He is a true friend of the high school coaches, and has been since his first tenure at UNC. Coach Brown and his staff were in Greensboro, as were many of the college coaches throughout North Carolina.

These events also gave me a chance to visit with real legends of the game: Dixon Sauls, Phil Padgett, Al Britt, Kenny Browning, Allen Brown, Bob Lewis, David Gentry and Sam Story, to mention only a few. If I were a young coach, I would pick the minds of these guys, because they knew how to win. David Gentry from Murphy is the winningest coach in the history of high school football in North Carolina.

One that we all miss was a man’s man, the late-Jack Holley, of Wallace-Rose Hill. Holley was not only a legend, but he became a legend the old fashion way — hard work and fundamentals. Every one who has coached football knows of Coach Holley, because he was that good, but he never boasted about it. Just play one of his teams, and your squad will come away bruised and beaten. In Greensboro, there were a few of us who had lunch together Saturday, and we talked about Holley. Allen Brown and Kenny Browning remembered him well and spent most of lunch talking about his teams. Coach Holley always worked my camps in Williamston, and was a true friend who would not accept any pay. He loved helping kids, and for Holley to say that you were a friend was as good as it gets. Holley is a true legend of our game!

In Greensboro, there must have been 600 coaches, and a record turnout for the NCFCA at the Marriott. I think you will see new rules in place for next year and definitely for 2021 that will impact football. These rules will help decrease the concussion rate and help football coaches keep our game in perspective. These rules were unanimously voted on by the membership, and if a coach was not there, it was his own fault.

I personally look forward to the implementation of these rules, and think it might be the best for our great game, as we now know it.

I have learned many lessons in life between two white lines and thank every coach that ever coached me!

— Harold Robinson Jr. is a former coach at Williamston High School for 31 years and a member of the East Carolina coaching staff for 12 years.

There are plenty of talented ball players in eastern North Carolina and Beaufort County. There’s no shortage of players that... read more