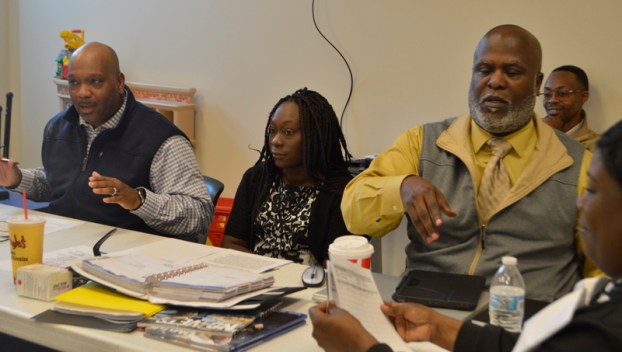 FOCUS ON REENTRY: Bringing together local clergy, nonprofits and government agencies, a community reentry meeting at Harvest Church on Tuesday focused on how to help local ex-offenders reenter society after serving their time. Pictured (left to right) are Pastor Rodney Cole Sr., of the Interfaith Clergy Standing for Our Community, Barbara Gaskins, of the Justice Reinvestment Group of N.C., and Victor Hinnant, regional reentry specialist for the N.C. Department of Commerce. (Matt Debnam/Daily News)

Within a 50-mile radius of Beaufort County, seven prisons in five counties have the capacity to hold more than 5,500 inmates. Scattered throughout counties between them, county detention centers hold countless others awaiting trial.

But what happens when criminal offenders have done their time and prepare to leave these facilities?

A new effort in Beaufort County is working to help answer that question by providing resources to help prevent former offenders from returning to jail. During a well-attended meeting at Harvest Church on Tuesday, representatives from local government agencies, nonprofits and churches moved forward with creating a local reentry council for Beaufort County.

“Our goal is to reacclimate ex-offenders or returning justice-involved citizens into society so that they can become productive citizens,” said Barbara Gaskins, a local reentry professional who has been spearheading the effort. “If we as a community step in and help these individuals, then they are more apt to be an asset to society rather than a liability. By helping them, it decreases recidivism.”

On release from prison, ex-offenders face a variety of challenges, starting with the most basic needs of food, housing and transportation. Once those needs are met, education and employment are the next goal. Gaskins hopes to see the Beaufort County Reentry Council connect ex-offenders with these resources locally.

Leading the meeting with Gaskins, Pastor Rodney Cole Sr., of Interfaith Clergy Standing for Our Community, and Victor Hinnant, of the N.C. Department of Commerce, represented the faith community and state government.

While that group oversees state-wide reentry efforts, local reentry councils have also been established in 20 counties throughout the state, including Pitt, Craven and Pamlico counties. Fifteen of those councils receive state funding, a goal Gaskins wants to see the Beaufort County council work toward.

As to the next steps, the group is creating committees to help address food, transportation, housing, education and job placement. Anyone interested in learning more about the effort can contact Gaskins at 252-495-3173 or email washington2ndchances@gmail.com.