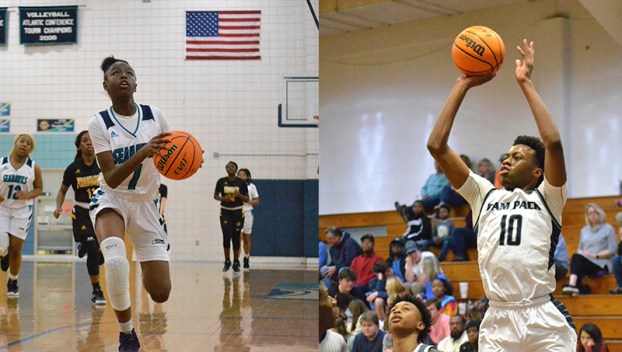 PLAYOFF BOUND: (Left) Southside’s Jasmine Blango has an easy lane to the basket during a fast break in the Lady Seahawks’ win over Perquimans earlier this season. (Right) Washington’s Jamauri Bryant squares his shoulders for a shot in the Pam Pack’s first round matchup of the 2-A Eastern Carolina Conference tournament last week. (Mitchell Thomas / Daily News)

Basketball season has reached the home stretch. All that’s left is the North Carolina High School Athletic Association’s state tournament. Washington High School’s boys and Southside’s girls are the only two teams from the area to make the field of 64 teams.

The Pam Pack (17-8, 9-3) won two games in the Eastern Carolina 2-A Conference tournament and advanced to the championship game against Kinston, but couldn’t quite overcome an 18-point, second half deficit. They made a late 10-2 run, but it was too late.

Washington — which earned a 14-seed in the NCHSAA tournament — will have to play Greene Central (19-seed) for a fourth time at Dave W. Smith gymnasium. Tip-off is set for 7 p.m.

The previous three meetings between the Rams (14-11, 8-4) and the Pam Pack have been hard-fought. The first was a double-overtime thriller, and Washington prevailed 79-71. The second contest resulted in Washington squandering an 11-point halftime lead, falling to the Rams, 68-59. The third contest in the 2-A ECC semi-final, Washington sustained an early lead at home and never let off the throttle, winning 77-58.

“Conference games are always the toughest,” Pam Pack head coach David Allewalt said. “We know each other better than anybody else would, and one thing can change the game in either direction. We’re going to have to be executing properly in order to get the (win) and move on to the second round.”

The second-round matchup would be against the winner of Farmville Central (24-2, 12-0) and Jordan Matthews. Farmville has won the previous two state championships in 2-A, and has the makeup to win its third straight. Allewalt said his team competed with the Jaguars well enough earlier in the season to know they have a shot at taking down the two-time defending champions.

“We played them earlier in the season without a couple of our players in that game, and they had one out as well, but we hung around with them for four quarters. The final score doesn’t tell how close that game was. We were tied with five minutes to play in that game, and we let things get away from us. But if your mentality is to win a state championship, then you’re going to have to beat the best teams to do it. To me, playing Farmville earlier might be better than playing them late.”

The winner will likely have to face 3-seeded Weldon (22-1) in the second round. The Lady Chargers are in the same conference as Northampton and defeated the Lady Jaguars three times by sizable margins this season.

Southside will tip-off against Northampton at 7 p.m.