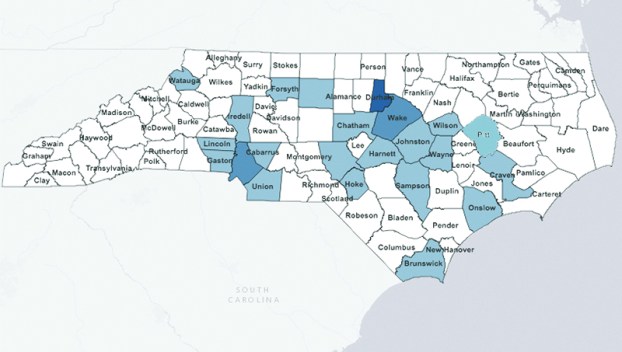 The number of confirmed cases in the U.S. went from 7,769 on Wednesday to 13,383 cases on Thursday, and 176 deaths are attributed to the virus nationwide. Five percent of all active cases are considered serious, requiring hospitalization — down from 19% three weeks ago, according to Beaufort County’s Office of Emergency Services.

In North Carolina, COVID-19 in confirmed present in at least 23 counties, with 0 deaths. Cases have been confirmed in Brunswick, Craven, Harnett, Johnston, Onslow, Pitt, Sampson, Wayne and Wilson counties in eastern North Carolina. Durham County (32) and Wake County (22) have the most cases in North Carolina.

“COVID-19 typically causes flu-like symptoms. It seems to start with a fever, followed by a dry cough,” the press release states. “It rarely seems to cause a runny nose, sneezing or sore throat. These symptoms have been observed in only about 5% of patients. Sore throat, sneezing and stuffy nose are most often signs of a cold.”

The press release emphasized that if you are sick, you should stay home for at least 72 hours until after symptoms go away. If needed, call a health care provider or the local health department, but do not travel to those facilities.

A reminder of safe practices, necessary for all:

Wash your hands frequently with soap and water for at least 20 seconds.

Avoid close contact (less than six feet) with people who are ill.

Cover your mouth and nose with a tissue when you cough or sneeze and throw it away.

Clean and disinfect surfaces that are frequently touched.

Community effort can help us slow the spread of COVID-19

It takes a community working together to help slow the spread of COVID-19 in North Carolina and beyond, according to... read more