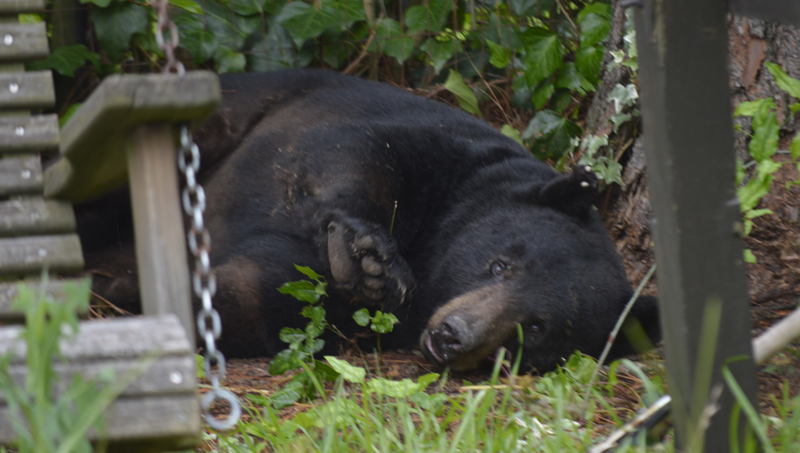 TAKING A REST: A male black bear lays down for a nap in the backyard of a Van Norden Street residence Thursday morning. (Matt Debnam/Daily News)

A black bear drew a crowd in Washington on Thursday morning after wandering into a neighborhood on Van Norden Street. With the North Carolina Wildlife Resources Commission and the Washington Police Department keeping watch, people took photos and videos of the animal as it was resting in the back yard of a residence.

“Washington Police Department started receiving calls at about 6 a.m. about a bear being in the city limits,” said NCWRC Sgt. William Cain. “They contacted me and I responded out here. There’s not really anything we can do except wait for him to leave. He got to a spot and he’s just hanging out, taking him a nap right now. So he’s here until he decides he wants to go somewhere else.”

As a matter of policy, the Wildlife Resources Commission does not relocate wild animals, according to Cain. He said if the agency did relocate the bear, it could potentially cause problems in that area in an attempt to find its way back home.

“More than likely, when things quiet down, he’ll decide to leave on his own,” Cain said. “There’s been a constant flow of traffic, with people wanting to walk over there and look at him. He’s not going to leave while people are walking around and looking at him.”

Also on Thursday morning, Cain said he had heard reports of another bear wandering near Washington High School, but authorities were unable to locate that animal. He added that this time of the year is mating season for black bears and they’re prone to wander.

“This is a male bear and this is normally the time of year we have bears come into Washington,” Cain said. “There’s two things happening now. The sows are running the yearling bears away and most of the time that’s what we deal with. This is a bull bear, so he’s been out roaming around, looking for a mate. He probably wandered into town last night and hasn’t been able to leave today. He’ll probably leave at nightfall.”