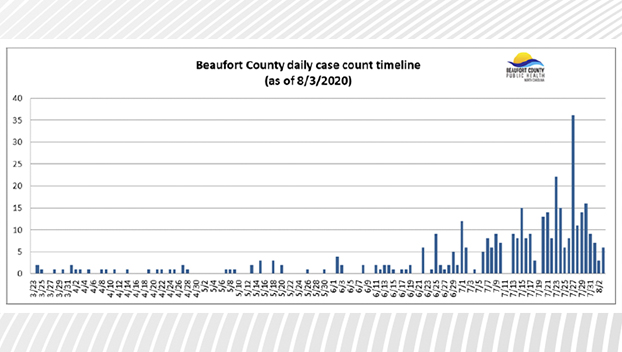 Beaufort County had a total 406 confirmed COVID-19 cases as of Thursday, an increase of three overnight. There are currently 117 active cases in the county and 12 people are hospitalized, according to the Thursday update from Beaufort County Emergency Services and Beaufort County Health Department.

Beaufort County’s number of total cases has increased dramatically over the last three weeks, with more than 300 new cases. According to the update, 287 of those positive cases have recovered from the virus. As of Thursday, there have been two COVID-19-related deaths in the county, according to the update.

The number of confirmed COVID-19 cases in North Carolina continued to rise from 129,733 Wednesday to 131,802 Thursday. There have been 2,126 deaths in the state attributed to the virus, an increase of 41 overnight. The state currently has 1,147 COVID-19 associated hospitalizations and 105,093 people are presumed recovered from the virus in North Carolina.

There had been 4,864 tests completed in Beaufort County as of Thursday, with 4,345 negatives, 397 positives and 122 pending. These are cumulative numbers and include tests performed at the health department and reporting private medical facilities through the county. Nine of Beaufort County’s cases were tested in other counties but are Beaufort County residents.

COVID-19 has defined the landscape of 2020 in the U.S. Economic shutdowns have shuttered some businesses. Others are holding on,... read more