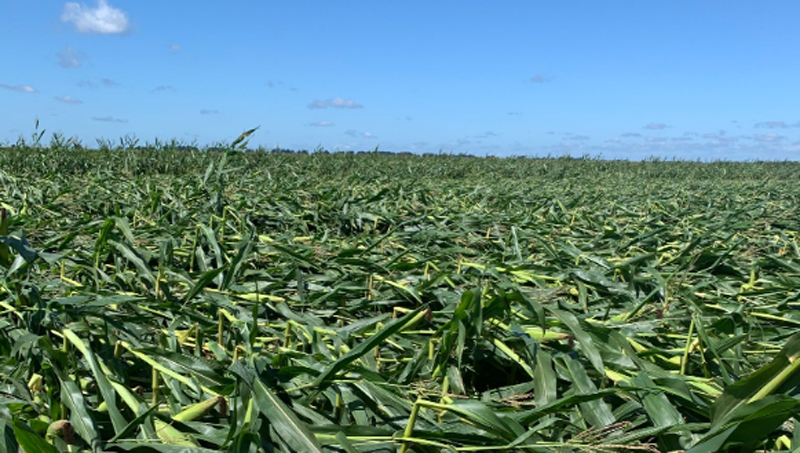 LAID DOWN: Aside from damage to tobacco crops throughout the county, some of the biggest impacts from Tropical Storm Isaias were to corn crops and timber along the track of a tornado that hit just east of Bayview. Cooperative Extension Director Rod Gurganus says the crop damages stretched to U.S. Highway 264 and beyond. (Todd Boyd)

It’s been a rough few years for farmers in Beaufort County. Most recently, Hurricane Florence in 2018, then Hurricane Dorian last year, caused widespread damage to local crops, but according to Beaufort County Cooperative Extension Director Rod Gurganus, the impact from Tropical Storm Isaias was isolated, compared to previous storms.

“Generally speaking, as far as widespread damage goes, it’s not terrible,” Gurganus said. “All the crops were blown around a little bit, you see some tattered leaves and leaning of the stalks, but generally, it’s nothing that we can’t deal with.”

Of all of Beaufort County’s commodity crops, he says tobacco was probably affected the most, suffering torn and bruised leaves. Gurganus speculated this could pose challenges come harvest time, forcing some farms to pick the leaves by hand, rather than using mechanical means. It could also mean a degradation of leaf quality once the tobacco is cured.

“We’re still a number of days from seeing what we’re going to get there,” Gurganus said. “Most of the time, it takes a few days for the damage to really show itself. … Tobacco is unique in that it’s a little bit different than everything else in this stage of the game. … We dodged a bullet on this one for the most part, in general terms, but the tobacco guys are going to see an impact from this.”

For the most part, Gurganus says the damages to other crops this week were located in isolated pockets throughout the county, with crops affected differently based on their variety and maturity. Some of the biggest damages occurred north of the area where a tornado struck near Bayview.

“It did some significant damage, primarily to corn crops,” Gurganus said. “We’ve also got significant acres of timber that were broken off. It was a narrow path, but it skipped along far enough that it went from Bayview, to Jackson Swamp, right up to (U.S. Highway) 264, that we could track it.”

As for other crops such as soybeans and cotton, Gurganus said those should rebound fairly quickly at this point in their development.

“We might have lost a few bolls here and there, and a few pods on the soybeans,” Gurganus said. “We hope we don’t see any longer-lasting results there. Now, if we get another storm in September or October, obviously it’s a bit later in the season for cotton and soybeans, and sometimes we do see more damage, especially with cotton. We’ll see what we get.”