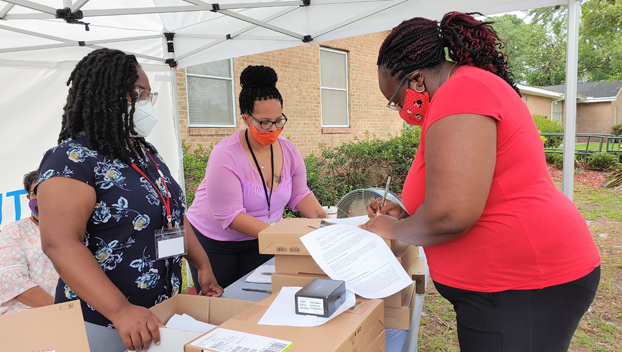 New Dell computers and Chromebooks have been piled high this week at Washington Housing Authority locations all over town.

The devices are being given away, free of charge, to residents whose children don’t have access to this kind of technology and, without which, their ability to get a quality education will be limited at best and hampered at worst.

Funding for this effort comes from the $2 trillion CARES Act, which was unanimously passed by the Senate in March and signed into law in April by President Donald Trump. Washington Housing Authority Executive Director Vanessa Dunn said part of the legislation includes nationwide guidance on how to spend the money, “and we decided to use some of that in an effort to close the technology gap for our children.”

Students in grades from Kindergarten to fifth will each receive a Dell Chromebook, while those in sixth through 12th grades will be given a Dell laptop.

“One of the important things that came to us is that a lot of kids have had to share devices — if they had one at all,” Dunn said.

She said the theory is that sharing a device is never an equal-opportunity experience among siblings because of ever-changing family dynamics. Dunn added that each student needs his or her own computer equipment in order to concentrate and progress at their own pace and fully benefit from the learning opportunities they receive in school.

The devices being given by the Housing Authority will be compatible with a similar program currently in operation at Beaufort County Schools, with just one difference between the two. “With our program, these are their devices, free and clear,” Dunn said.

Students in the school system’s program are given the options of paying a $20 insurance fee for their borrowed devices or take responsibility for the cost of any damage to borrowed equipment, according to Mark Doane, assistant superintendent for Beaufort County Schools.

Dunn said the equipment distributed in the Housing Authority program is worth approximately $157,000 and will include a hot spot device to supply WiFi for households that don’t have internet. The equipment is being supplied through a partnership with T-Mobile, and Dunn said it comes with “all the bells and whistles,” including unlimited data and the capability for that hot spot technology to allow unlimited access for up to 11 devices in any qualifying household.

Housing Authority resident Shawanna Spencer said she is grateful for the program, its immediate benefits for her three school-aged children and all the opportunities that could open up for them as a result.

“It means a lot that they’re trying to help out, and that they’re concerned with helping them get their education, which is most important,” she said, adding that her children are already involved with youth sports camps sponsored by the agency. “It adds to what I already do with them to help them excel.”

As of Tuesday, 60 of the 289 devices had been received by Housing Authority parents, according to Dunn. She said more than 100 devices will be distributed at the Old Fort location, where the largest number of Housing Authority residents are located, and parents who could not pick up computers at the Housing Authority’s neighborhood visits will round out that number if they receive their equipment on Friday, which is “make up day.”

Computers were distributed at Eastern Village and Oakcrest on Monday, and at Old Fort on Tuesday. Westbrook residents may pick up computers at their complex from 2 p.m. to 6 p.m. on Thursday. The “make-up day” on Friday will also run from 2 p.m. to 6 p.m., at which time computers will be available at the Housing Authority’s central office, located at 809 Pennsylvania Ave.

“Don’t forget that ‘virtual school’ begins this coming Monday,” Dunn said, emphasizing the importance of picking up the children’s computer equipment before classes begin. Residents with questions may call the Housing Authority at 252-946-0061.