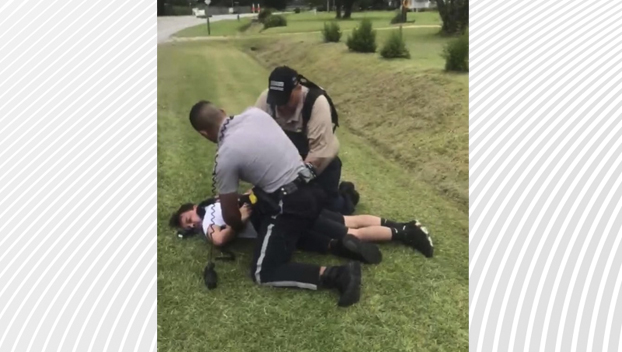 UNDER INVESTIGATION: An internal investigation at the Washington County Sheriff's Office is focusing on the Aug. 6 arrest of Jay Castaneda, pictured in this video still. (Jay Castaneda)

The investigation stems from an incident on Aug. 6, during which Franks stopped Plymouth resident Jay Castaneda, 21, who was walking along N.C. Highway 45 near his mother’s house. According to Washington County Sheriff Johnny Barnes, Franks says Castaneda was stopped for walking in the middle of the road, impeding traffic.

When Franks came up behind Castaneda in his patrol vehicle, Castaneda began recording the encounter via Facebook Live. The video shows a confrontation between Franks and Castaneda during which Castaneda questioned the deputy’s reason for stopping him.

After a bystander attempted to take Castaneda’s phone at Franks’ behest, the video ended. Castaneda, who has an injured back, alleges that Franks then forcibly took him to the ground after being advised of his medical condition. A second video from Castaneda’s mother shows Franks and a Plymouth Police Department officer holding Castaneda on the ground. Barnes says that Franks was not equipped with a body camera and there was no camera in the patrol vehicle.

“It’s like any other investigation,” Barnes said. “You look at those videos that are out there, interview the other officers that came up, or any officer that may have had body cameras, if there was anybody in the neighborhood that has outdoor security cameras that would show us anything and interview everyone that came through and saw anything about it.”

Barnes says he expects the investigation to be completed by the end of this week or early next week, at which point the WCSO will discuss the results with Castenada before sharing further information with the public. Franks, who has been working for the WCSO for approximately two years, is still on duty while the investigation continues, Barnes said.

As a result of the confrontation, Castaneda was charged with assault on a government official, resisting a public officer, injury to personal property and impeding traffic. He was later released from the Washington County Detention Center on a $3,000 bond. A prior, unrelated charge of carrying a concealed weapon is also pending against him. Castaneda said he had two previous encounters with Franks prior to the Aug. 6 incident.

Last year, Franks brought a lawsuit against the BCSO and its administrators, alleging that he had been subjected to racial discrimination and harassment while employed there. A response from the BCSO denied those allegations, saying that Franks was terminated from the BCSO for unprofessional behavior. According to the BCSO, that lawsuit has not been resolved.