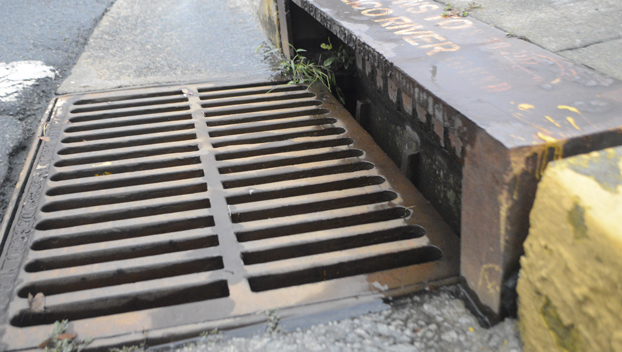 MORE OR LESS: Owners of some properties, such as large retailers and apartment complexes, will pay more under new stormwater fees adopted by the city, while others, such as homeowners and small businesses, may see their fees decrease. The city is also now assessing stormwater fees on properties that are not connected to utility services. (Matt Debnam/Daily News)

With the implementation of an updated fee schedule, Washington residents, businesses and property owners may now pay more or less to maintain the city’s stormwater system, depending on the type of property they own and the amount of impervious surfaces on each.

“We made it a more equitable calculation,” explained City Manager Jonathan Russell. “For commercial and multi-family residential properties, it wasn’t really an equitable breakdown. You had some that had a burden that, based on their square footage, was a little higher than they should be paying, and then you had some really large spaces that had a great deal of impervious surfaces that weren’t paying their fair share.”

Generally, Russell said individual homes and most small businesses should see a reduction in the stormwater fees they pay, while larger businesses and multi-family properties may see an increase based on the amount of impervious surfaces on the property.

The fees apply across the board to all properties in the city that have impervious surfaces, which contribute to water runoff and create additional strain on the city’s stormwater system. Properties that are not connected to utilities are also subject to the fees.

“If there’s a vacant parcel with a large piece of concrete poured on it, they are receiving a bill also,” Russell said. “That was something that was previously not done, and we have had some calls asking about that. Again, it is increasing the stormwater flow and falls under the umbrella of being charged a stormwater utility.”

One local property owner, Mike Weeks, says he doesn’t believe the fees are being assessed correctly. “I submitted a public information request and obtained a copy of the (stormwater) ordinance,” Weeks said. “In my reading of the ordinance, I don’t believe that the fees are due on these properties. I called the department and talked to them about it. Quite frankly, I don’t think they’ve even looked at the ordinance.”

Russell says the fees are assessed for each property in the city based on calculations taken from GIS mapping and aerial photography, along with some in-person assessments by city staff. Those fees, in turn, are used to maintain and make improvements to the stormwater system, which can quickly become overwhelmed in parts of the city during severe weather events such as hurricanes.

“It will go in conjunction with the $3 million grant we recently won to address stormwater near the hospital,” Russell said. “We’re really trying to leverage these funds as much as we can to address stormwater issues throughout the city. It helps pay staff to clean ditches, clean storm drains and maintain the capital investment in the ground for drainage.”

Those with questions about their storm water fees and the city’s policy can call the City of Washington Public Works Department at 252-975-9302.