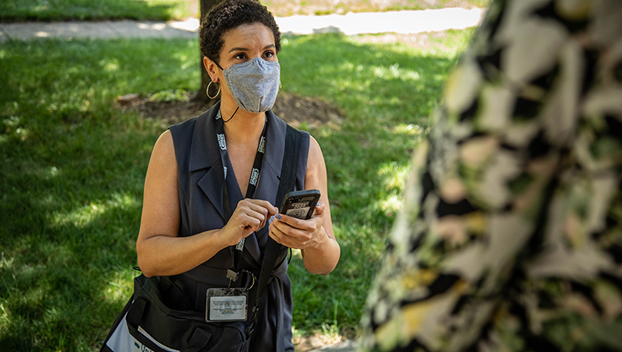 KNOCK KNOCK: The Census Bureau requires that census takers wear a mask while conducting their work. They will follow CDC and local public health guidelines when they visit. (U.S. Census Bureau)

There may be a knock at the door for many Beaufort County residents in the coming weeks, as U.S. Census workers go from door-to-door to follow up with households that have not yet responded to the decennial population count.

As of this week, self-response rates for Beaufort County were hovering at 55.9%, compared to a statewide self-response rate of 60.2%. For a variety of reasons, from allocation of federal funding to determining representation in Congress and the North Carolina General assembly, local leaders say there’s a lot riding on getting an accurate census count.

“There are a lot of challenges, not only with the self-reporting piece, just because of access, as well as the challenges we have with COVID,” said Beaufort County Manager Brian Alligood. “We certainly hope folks will fill that out and be responsive when the folks come out to follow up on that. It’s critical for us.”

By municipality, the response rates were as follows this week:

According to Carolina Demography, a team of demographic researchers focused on population changes, North Carolina could miss out on $1.5 trillion dollars in federal during the course of the next decade due to an inaccurate count, impacting services such as hospitals, schools, pre-k services, emergency response, senior services and Pell grants to help college students. North Carolina’s representation in Congress could also be affected, with an accurate count gaining the state an additional seat in the U.S. House of Representatives.

As census takers visit homes in our area, the U.S. Census Bureau offers the following guidelines to help identify its employees:

For those who would rather complete the census themselves, the window for self-response has been extended to Sept. 30. One can respond online at 2020census.gov, by phone at 844-330-2020 or by mailing back a completed questionnaire to U.S. Census Bureau National Processing Center, 1201 E. Tenth St.
Jeffersonville, IN 47132.