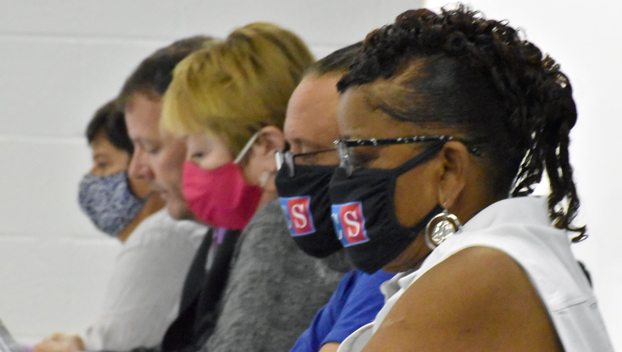 Beaufort County Schools will continue with remote learning through at least Oct. 14, following a 5-4 vote of the Beaufort County Board of Education on Tuesday night.

Earlier in the meeting, Hodges proposed a motion that would have allowed for students in pre-k through eighth grade to return to the classroom on Sept. 14, while high school students remained remote. He later rescinded that motion.

For Walker, who serves as chairperson of the BOE, exactly 118 families have reached out to her in the past few weeks to express concerns about the fall semester. Of those, she says 116 have said that they want their children back in school.

“Then I look at what our employees want, which seems to be an opposite number,” Walker said. “I’m trying to figure out how to marry those two when they don’t agree. That’s the difficult task that we have tonight. I want to go with what my parents and families want, but I’m also in a family of teachers, and I know what they want. They’re even conflicted. I don’t think there’s a right answer. No matter how we vote, there will be a large population in the community that will be disappointed.”

Allen, who represents Belhaven and the surrounding area, said he has heard from many parents about the struggles they face in trying to facilitate their children’s education.

“In rural America, hotspots do and don’t work, WiFi does and doesn’t work, and they do or don’t have WiFi,” Allen said. “It’s been a struggle for parents. I’ve heard from some parents who are paying $125 to $200 a week just to have the kids in daycare or to have somebody to take care of them. “

For Draper, it’s also a matter of choice. According to figures presented to the board, BCS enrollment has dropped by 300 students this semester, almost double the average attrition of 150 students in recent years. He said those losses have been particularly heavy in the northeastern part of the county.

“Everyone I’m hearing from in my community wants a choice,” Draper said. “That’s all I’m hearing — ‘I want the choice. That doesn’t mean I’m going to send my kid back to school, but you’re not giving me that choice anymore.’ They’re looking at other options other than Beaufort County Schools.”

“The governor has given us the opportunity to go with two options, and I think we should pass that along to the public,” Oliver added.

Under Plan B, parents would still have the choice of having their children participate exclusively in remote learning. A July parent survey showed that 39.8% of responding parents would go with that option.

Like the public, opinions on having students back in the classroom are also split among educators. According to a recent survey of teachers, administrators and staff members, 74% thought that BCS should remain under remote learning status for the time being.

As to why they’re not ready, a number of factors weigh in, including the potential spread of the virus and making necessary adjustments to minimize it. Since July 1, 60 BCS staff members have either tested positive for COVID-19 or had to quarantine due to a close contact. Forty-one of those have been since Aug. 18.

Another issue is the juggling of online and in-person learning — the idea of teaching to a class and to students through a screen at the same time.

“I’ve talked to a lot of teachers,” said Bilbro. “I haven’t talked with many parents, but the teachers are not ready for them to come back. They’re scared about having students online and in school at the same time and the dynamics of that. My recommendation is to go to nine weeks, and if the cases have leveled off, let’s bring them back to school.”

As the board discussed the notion of reopening for pre-k through eighth grade, BCS Superintendent Matthew Cheeseman noted there would still be a number of logistical challenges to overcome in a two-week timespan before Sept. 14, including staff morale, communicating with families, ensuring school nutrition resources and planning transportation.

Then there’s the issue of respecting employees’ rights to work in a safe environment and making appropriate accommodations for staff members who require them.

“The North Carolina Association of Educators has already put out demand letters of employee rights,” Cheeseman told the board. “I’m forecasting, as I told some of you when you called me and asked, that depending on your decision here tonight, we’re going to see some response from our employees tomorrow.”

In an Aug. 31 email, Beaufort County Health Director Jim Madson advised that schools could reopen under Plan B with what he called “minimal risk.” That plan would involve reopening schools with reduced capacity, with some students learning in person and others learning online at the same time.

“I believe that option B can be utilized with minimal risks; however, I give you the following considering on if you should,” Madson wrote. “The research is an early and limited picture of children and schools during the COVID-19 pandemic. You will get positive cases discovered in the school. Little outbreaks may even occur. You need to be prepared for this inevitable occurrence. You will need to be vigilant in protection of the teachers that are higher at risk and children with underlying health issues. Though not a high number, Beaufort County is currently experiencing an increase in cases.”

As the Oct. 14 date approaches, the board agreed to begin meeting weekly to review the latest data and plan for a potential reopening.