Foster feline fur-parents: where are you? 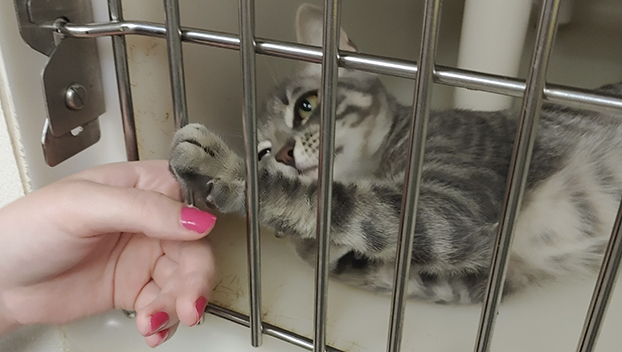 TAKE ME HOME: About 30 cats and kittens are currently being cared for at the Beaufort County Animal Shelter. Without more feline foster care volunteers to house them until an adoption can be arranged, many of them may be euthanized because of laws that regulate how much time they can stay at the shelter. (Karen Thiel)

Dozens of cats and kittens are in desperate need of foster homes in  Beaufort County.

The root of the problem is the attrition of past volunteer fosters to temporarily house cats and kittens, a loss caused by volunteers’ relocation and other personal matters, according to a recent letter about the “dire, urgent need” for feline foster parents. The alert was sent by animal lover Dottie Walker who, since 2011, has photographed the adoption-ready dogs and cats that appear in the Daily News as “Pets of the Week.”

“Animals are not throwaways. People need to have regard for their lives. The shelter staff is doing a wonderful job, but time there is limited for these animals, who need fosters to be a bridge between the shelter and their forever homes,” Walker said.

Feline overpopulation is a major issue in Beaufort County, according to Leslie Steele, who runs ENC Shelter Cats, affiliated with Friends of Beaufort County Animal Shelter. “We lose so very many through euthanizing because we don’t have enough people willing to give them space and time.”

Walker and Steele estimated that about 20 cats are brought to the shelter weekly. Beaufort County Animal Control Chief Billy Lassiter said he expects even more, because his list of about 30 pending trapping cases could each add an average of 15 to 30 cats to the shelter’s current population. Lassiter said the shelter has 41 cat enclosures, with 29 occupied as of Tuesday.

Walker and Steele said lives could be saved if local cat lovers would make the short-term commitment to house and feed them. The felines need to be isolated, usually in a bathroom or spare room. They generally stay for about a month, depending on the number of adoption requests. Steele said every cat receives standard testing and de-worming before arriving at their foster homes.

“It’s not a hard job. It’s a fun job,” said Steele, whose opinion was echoed by Humane Society board member Linda Roberts: “I was always a dog person, but after spending time with the shelter cats, my heart changed. Now I foster cats as well, because I know I am helping them go to a forever home.”

Interested persons may leave a message for Steele at 252-802-0789, including name, number, and a brief message about their desire to foster, so Steele can schedule an interview.