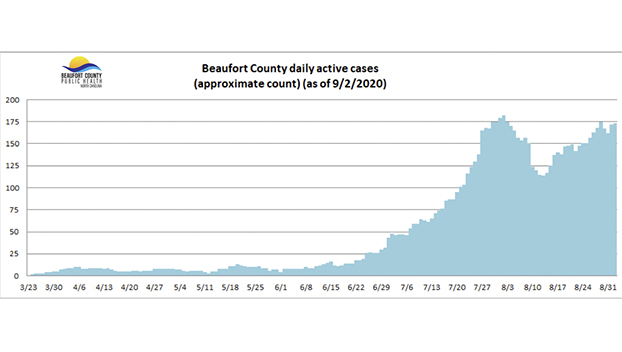 The Beaufort County Public Health Department has made access to its COVID-19 data public by making it accessible online.

The COVID-19 Beaufort County Surveillance Data is now available in slideshow format, via a link from the health department website, allowing the public to view the data at any time, according to health department Director Jim Madson.

“I do these graphs and send them for the daily report, and we thought it would be nice if it was up on the web, so folks can look at it all the time,” Madson said.

Update daily, the presentation assembles all the health department data in an easy-to-read format for  those looking for more information about the virus on a local basis.

“What it also did is open up the ability to do some more graphs. Doing it for the daily report, it was kind of limited to two or three at a time,” Madson said. “We’re always looking for ways to show the community what’s going on in the county.”

Case numbers have continued to climb in Beaufort County over the past week and half, but Madson said the encouraging news is that percentage of positive tests has come down from a high of 10% on July 24 to 5.2% last week.

“I feel, in part, that we’re getting increased numbers, but I also think we’re picking up more positives because we’re doing more testing,” Madson said.

The health department offers COVID-19 testing every Thursday from 9 a.m. to 11 a.m., and hosts other testing sites in order to target more vulnerable populations.

While North Carolina Gov. Roy Cooper announced Wednesday that some restrictions are being lifted on businesses that remained shuttered during Phase II of the state’s reopening, Madson said the decision shouldn’t impact the precautions taken by individual residents, especially since flu season begins in a little more than a month.

I think people should be more vigilant, especially as we come into the flu season, because it will also cut down on the flu numbers,” Madson said. “Typically in the past, we’ve said, ‘Don’t be around people if you’re sick; don’t go out if you’re sick.’ We say that every year for flu season. We haven’t called it social distancing, but we’ve hinted at it.”

To view the Beaufort County Surveillance Data, visit co.beaufort.nc.us/departments/human-services/public-health/2019-coronavirus-covid-19 or access the link through the daily update sent out by Beaufort County Health Department and Beaufort County Emergency Services.