The joys of sailing 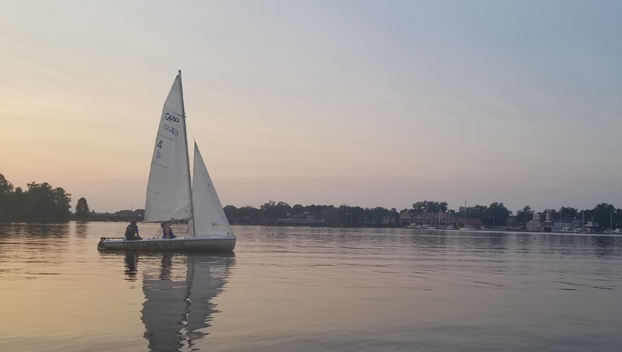 Growing up, I had the pleasure of attending a summer camp in Pamlico County by the name of Camp Don Lee. I spent my formative summers there, learning to sail Sunfish, Flying Scots and Hobie catamarans. As multi-week campers, we would load up our gear and take those vessels on overnight sailing trips all up and down the Neuse River. I then had the delight to lead such trips for the next generation when I was in my late teens and early 20s.

Flash-forward about a decade, and it had been quite a while since I set foot on a sailboat. That is, until I received an invitation from my friends at the Little Washington Sailing School last week. Their summer season finished, the plan was to host a Wednesday night regatta with some of their students and some adult friends of the program. I excitedly accepted.

I was the first to arrive at the building that night, and was greeted by two young staff members, Ollie and John, both of whom had just spent their summer teaching young sailors the ropes.

One of the next few people to arrive was my partner for the evening. Mark Woodland, who has shot some excellent videos for LWSS, like myself, was a few years removed from the rigging, and had never been on a Vanguard 420.

Soon the folks we would be racing against, young sailors who this very summer had participated in the LWSS program, joined us. I recognized one of them as the winner of this year’s regatta, and knew that the competition would be fierce. 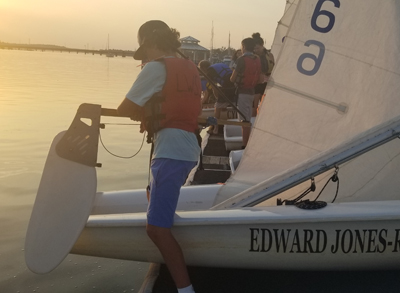 Heading down to the waterfront, we began the process of rigging up the boats to get on the water. Mark and I had both rigged sailboats before, but were not as familiar with the little intricacies that come with rigging a 420. Ready to help, in stepped the staff of the LWSS, and their students, to help show us what we needed to do. It wasn’t long before we were rigged and ready to go.

Getting out onto the Pamlico, it soon became apparent that positioning and balancing two adults in the small boat would be interesting. My editor had also tasked me with getting a few photos on the water to use with this week’s Pamlico Life section. No big deal with a tiller in one hand and a sheet line in the other, right?

As we approached the starting line for the big regatta, I snapped a few shots and, Mark and I gradually found our sea legs. Tucking my phone in my lifejacket pocket, we prepared to race, and with a sharp blast of the safety boat’s air horn, we were off!

The course before us was fairly simple — an upwind leg, followed by a downwind run to the finishing buoy. There were three races that night — the first was one lap, the second was two, and then, we finished up with a three-lap run. With each lap, my shipmate and I felt a little more confident with the boat we were sailing.

While I’m happy to report that Mark and I were able to complete all three of those races, I will say that we came in last place each time. We were simply no match for those young sailors, many of whom had been out there a good part of the summer, learning from the fine instructors at LWSS. But man, did we have fun just being back out there sailing! 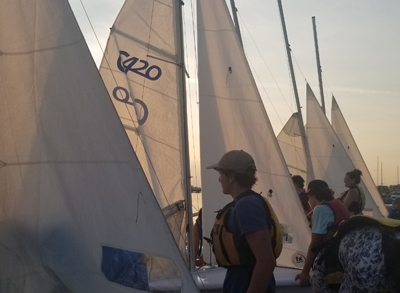 GETTING READY: Participants in last week’s Little Washington Sailing School regatta hoist their sails in preparation for an evening of sailing on the Pamlico. (Matt Debnam/Daily News)

As we returned to the dock in the dark, the final step was to unrig and remove the boats from the water. As we began to do so, we quickly realized that our centerboard was still down, as it smacked against the side of the dock. Oops. The instructors gracefully laughed it off and said it wasn’t the first or last time that would happen.

Of course, the crowning moment of the night was still yet to be had. As I stepped from the dock to the boat to lower the centerboard, I received a final lesson regarding the balance of the Vanguard 420. A foot on board, the little boat began to tilt, and SPLASH!

Into the drink I went, as the sailors say. The flashlight I used to illuminate our sail was the first thing to go. My flip-flops weren’t far behind it, forever lost to the Pamlico. My phone, thankfully, is one of those modernized, water-resistant models, and wasn’t permanently damaged. Aside from those slight losses, the only thing hurt a little bit was my pride, not to mention a general soreness over the next few days from bouncing around the fiberglass cockpit.

In the final estimation, however, it was such a treat to be able to sail with the folks at the LWSS this past week. Their students were skillful, confident, helpful and kind, and the staff members were nothing but encouraging, professional and courteous. It makes my heart happy to see these young instructors instill a love of sailing in this next generation of mariners.

We are indeed fortunate to have this precious jewel right here in our town, and I am so glad the Little Washington Sailing School was able to continue its programs safely this summer. I can tell, just from the short time I’ve spent with them, that this program builds confidence, teaches respect and makes better sailors of the kids it serves. Thank you, Little Washington Sailing School, for allowing me to put a tiller in hand and rediscover the joys (and quirks) of sailing this week!

To learn more about the Little Washington Sailing School and its programs, visit www.littlewashingtonsailingschool.org or find them on Facebook @LittleWashingtonSailingSchool.

Write Again … “What we Think we Become”

Pitching a tent on 15th Street