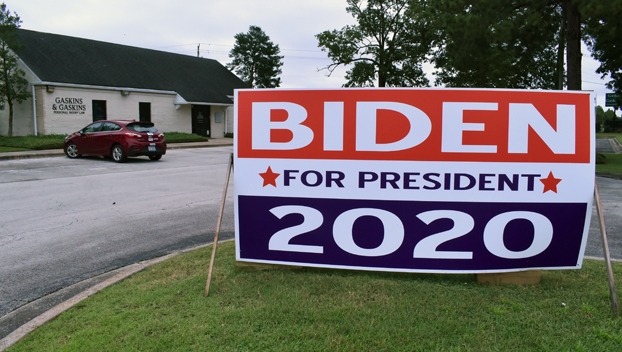 STOLEN: Washington Attorney Herman Gaskins is offering a $10,000 reward after a 4’x8’ political sign was stolen from his office on John Small Avenue. (Matt Debnam/Daily News)

A local attorney is offering a $10,000 reward for information leading to the arrest and conviction of individuals responsible for stealing a large political sign from in front of his office.

Herman Gaskins says the 4’x8’ Biden/Harris campaign sign was taken from his office location on John Small Avenue at 1:23 a.m. Monday. The office is located directly across the highway from the temporary location of the Washington Police Department. A surveillance video from the time shows three people participating in the theft, though Gaskins says no vehicle was seen in the footage.

“The frame for the sign was built from four-by-four, salt-treated lumber,” Gaskins said. “It took two men to pick it up and move it.”

Gaskins said the incident is under investigation by the Washington Police Department. Though the sign is only worth approximately $250, Gaskins says he is offering the $10,000 reward as a matter of principal.

“These people have trampled on my First Amendment rights, and there are people all over Beaufort County doing this,” Gaskins said. “Somebody needs to put a stop to it.”

Earlier this week, local party officials with both the Democratic and Republican parties said that they had experienced sign thefts in recent weeks. Democratic Party Chairwoman Elaine Wood says dozens of signs have been stolen or destroyed countywide, and Republican Party Vice Chairman Paul Varcoe says Trump/Pence signs have also gone missing. The Democratic Party is offering a $500 reward for information leading to arrests and conviction.

Both the Washington Police Department and the Beaufort County Sheriff’s Office have received multiple complaints regarding stolen signs. In North Carolina, it’s considered a class 3 misdemeanor to steal, deface or unlawfully remove a political sign.

Anyone with information about sign thefts in Washington is asked to call the Washington Police Department at 252-946-1444. County residents can contact the Beaufort County Sheriff’s Office at 252-946-7111.