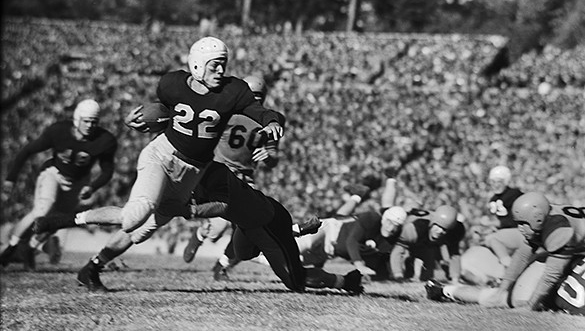 Charlie "Choo Choo" Justice of Asheville was a star tailback for the UNC Tarheels for four years and finished second for the Heisman Trophy in 1948 and 1949, the same years he was named first-team All American. Carolina amassed a 32-9-2 record, three bowl games and two Southern Conference championships from 1946 to 1949. (Charlotte Observer photo)

(This report is condensed from an article by Dr. Joyce Bateman Giglioni, which is scheduled to appear in its entirety later this year in Tyrrell Times, a Tyrrell Genealogical & Historical Society publication.)

It was thought that the Columbia High School graduation in 1950 (which occurred just one month before the Korean War started) would be like those before it — mainly of interest to graduates and their parents — until the featured speaker, Dr. Sylvester Greene, a noted professor in the School of Public Health at UNC-Chapel Hill, notified school officials he would be unable to attend but would be sending his assistant, Charles Justice, as his substitute.

Justice played football for the University of North Carolina from 1946 to 1949 after serving four years in the Navy during World War II.  While in service, he played football at Bainbridge Naval Center and acquired the “Choo Choo” nickname because he dodged tackles “like a runaway train,” one of his coaches said.

Justice was a bona fide superstar, a gridiron hero! He was a star tailback for four years and finished second for the Heisman Trophy, college football’s top award, in 1948 and 1949. Justice was named first-team All American in 1948 and 1949.  He and his teammates led the Tar Heels to a 32-9-2 record, three bowl games and two Southern Conference championships from 1946-1949. Johnny Long and his Orchestra recorded “All the Way, Choo Choo” while Justice was at Chapel Hill.

Great excitement was in the air as an estimated 500 people packed the CHS auditorium that Friday, May 26, awaiting Justice to address the graduating class.  Those present included the 24 graduating seniors, their parents, relatives and friends, plus local and far away people intent on seeing Choo Choo in person.

One graduate, while reminiscing the 70-years-ago special graduation ceremony, commented,  “I expect most of those present that night were there for the speaker rather than for us the graduates.”

Bobby Everton was a star athlete at CHS, and, with the aid and urging of Pug Combs and James Alexander, he saw Justice play in Kenan Stadium several times. “Everybody jumped to their feet every time Choo Choo got the ball,” he said.

Bobby and his cousin, Irvin Everton, (both CHS ’51) were standing in the back of the auditorium when Justice stepped into the room beside them. “Irvin and I were standing in the doorway, talking to Choo Choo, but we were tongue-tied and too scared to ask him anything,” Bobby admitted. “He was dark complexioned with a square face, a very nice-looking man. We were very impressed, to say the least. I think they paid him $100 to come.”

The setting for the graduation was Columbia High School’s spacious auditorium with its many windows and beautiful deep-blue velvet stage curtains.  People entered the second-floor auditorium by climbing the 21 or more wooden steps located on either side of the brick structure.

The stage curtains had opened and closed many, many times to memorable plays, piano recitals, weekly chapel services, class plays, community events, junior/senior proms and basketball games. Yes, the auditorium doubled as a basketball court or dance floor when the portable seats were stored away.

On this night of May 26, the auditorium was beautifully decorated with greenery and flowers of the season.  The stage curtains were open; the speaker and school officials  participating in the ceremony were all in their places. Piano music by Mrs. Mae Spruill Griffin echoed throughout the auditorium. Glee Club members, under the direction of Mrs. Darrell Cohoon, were ready to make their voices heard. Marshals Lenell Walker (Chief), Jimmy Alexander, Mildred Reynolds, Katie Swain, and Wayne Brickhouse were carrying out their assigned tasks. The class mascots Dana Davenport and Bud Cohoon had been well coached in exactly what their roles were, and they did not miss a step.

Finally, the big moment arrived! Justice gave his address.  “Let me urge you to be prepared to meet the issues before you,” he said. “I think there are three things you should try to remember and apply.

“First, be optimistic and keep faith with your friends, your country, and God.  So many times we forget to consult with God with our problems through prayer, but He will help us if we only ask Him.

“Second, we should live only one day at a time.  Do not worry about what may happen in the future.

“Third, we should set a purpose for ourselves, an ideal of what we want to do in life, and we should work to reach that ideal.  Always set your heart and soul on your ideal in life and never let obstacles get in your way, but work until you succeed.”

He announced that a trophy was to be given to the school by WGAI, an Elizabeth City radio station, for being first place winner in the Albemarle Classroom of the Air, and that Billy West, one member of the school’s team on the program, won first place for the boys and received a $50 savings bond.

Mr. R.L. Spencer, Chairman of the Tyrrell County Board of Education, presented the diplomas. Billy West gave the farewell address, and the exercise closed with the Farewell Song by the Senior Class members.

Justice autographed graduation programs before and after the ceremony, which, over the years, became memorable keepsakes.

After graduation, some classmates became teachers or administrators in public or private schools and institutions of higher learning. Some married and stayed in the area and began careers in agribusiness, lumbering, and farming. All were successful in their calling. They had a purpose — an ideal of what they wanted to do in life. They have a legacy of being hard working, caring, and responsible citizens. It is of interest to note that all class members married, and none were ever divorced.

Dr. Giglioni and Mr. Ernest Sutton helped further the education of some Columbia High graduates and others throughout the State of North Carolina by establishing educational scholarships.

The Class members live with hope and faith. They cling to the optimistic idea of not only a 70th reunion but also a future 75th reunion.  They give thanks for life’s many blessings. They continue to reminisce happy high school days and their special May 26, 1950, graduation when Charlie “Choo Choo” Justice delivered the graduation address.