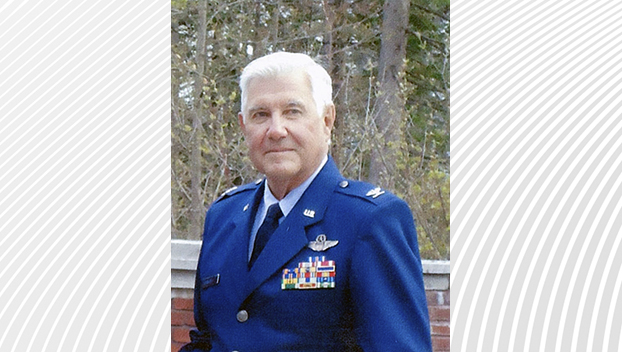 The book of life on Col. Raymond “Gene” Schwartz USAF (Ret) was closed on Sept. 6, 2020, at Vidant Medical Center of Greenville.

Gene was born on April 5, 1936, in a southwest Iowa farmhouse. Those were the days when doctors came to the house for rural births. Gene attended Atlantic, IA, high school and Iowa State College, where he received a BS in Agriculture and an Officer’s Commission in the U.S. Air Force.

After USAF pilot training, Gene flew a variety of aircraft for 11 years. He flew the F-86L Interceptor, then as an aircraft commander in a B-52G. The Vietnam War enabled Gene to get back into his first love, Fighter Aircraft, where he flew the F-105G “Wild Weasel” fighter, in which he accumulated 116 combat missions on two tours during the Vietnam War. The USAF then sent Gene back to school to receive an Aeronautical Engineering bachelor’s degree followed by a master’s degree in Systems Engineering.

His last decade and a half in the USAF was in various scientific and engineering management positions such as the F-15, AWACS and Communication Systems. He retired from the USAF in 1985 after 27 years of service. His decorations include the Legion of Merit, Distinguished Flying Cross, the Air Medal with five clusters and numerous others.

Following his retirement Gene and his wife, Ellen, accepted a position in Riyadh, Saudi Arabia, working as an engineer for the Royal Saudi Air Force. He and Ellen lived in Saudi Arabia for nine years, and they were able to travel extensively to over 35 countries around the world.

Gene and Ellen returned to the USA in 1994 and retired to a new home in the Summerlin Community of Las Vegas, Nevada. The death of Ellen’s father and the fact that most of their children lived in the eastern part of the USA resulted in them moving back to North Carolina to help care for Ellen’s mother and to be closer to the children. Ellen designed and had constructed a new home on the 55 acres that they purchased from Ellen’s parents. Ellen did enjoy being close to her mother in the last years of her life.

Gene believed in service to his country and community. While in Las Vegas and in NC, Gene became a substitute teacher in secondary schools. He enjoyed the interaction with young students and especially enjoyed subbing in math, science and history classes. While in NC, Gene was active in Bath’s St. Thomas Episcopal Church, serving numerous times on the Vestry and a leader in the church adult Christian education program. He also served as a volunteer at a local hospital where he provided more than 1,000 hours of service. He was an avid reader, especially books of military, religious and political history.

Gene was preceded in death by his parents, Raymond and Viola Schwartz. He is survived by his wife, Ellen, whom he described as, “the best thing that happened to him in his life.” Also, surviving Gene is a son, Dr. Bradley Schwartz, and his wife, Amy, of Decorah, Iowa; a daughter, Lori Cahoun and her husband, Dale, of Kinston; a stepson, Lt. Col. Steven Boyd USAF (Ret); and a stepdaughter, Karen Harrell of Waxhaw. Also surviving are Gene’s brother, Paul Schwartz, and his wife, Christel, of Brentwood, California; a brother, Gerald Schwartz, and his wife, Jane, of Greensboro, Georgia; and a sister, Marlene Martin, of Grain Valley, Missouri. Also surviving Gene are six grandchildren, one great-grandchild and numerous nieces and nephews throughout the country.

Gene was a life member of the Air Force Association, Order of Daedalians, The Red River Valley Association and the Wild Weasel Association. Gene continued to keep his civilian FAA flying credentials current from 1959 until he reached the age of 80. He enjoyed taking up family and friends who had never flown in light aircraft. He was a runner and bike rider for most of his life and estimated that he ran/biked 35,000 miles in his lifetime. He enjoyed working and playing outdoors, which is probably why he especially enjoyed the game of golf throughout his years of retirement.

In accordance with Gene’s and Ellen’s wishes, there will be no funeral or other celebrations of Gene’s life. He always wanted those who knew him to remember him as they last saw him and for the life he lived. A family gathering will take place at the time of the interment of Gene’s remains at Arlington National Cemetery.

Paul Funeral Home & Crematory of Washington is honored to serve the Schwartz family.