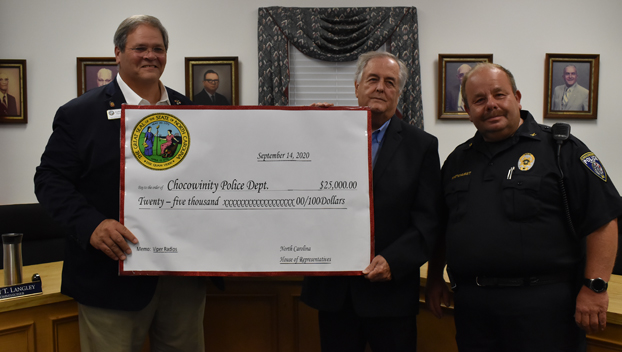 CHOCOWINITY — In June, Chocowinity Police Department Sgt. Todd Taylor found himself in a dangerous situation. Pursuing a suspect into Pitt County, Taylor lost communication with the CPD and was unable to communicate via radio with the Pitt County Sheriff’s Office, unaware that deputies had deployed stop sticks to help apprehend the fleeing suspect. Fortunately, Taylor saw the stop sticks before driving over them in his patrol car.

Now, thanks to funding included in recent COVID-19 legislation that passed the North Carolina General Assembly, that type of situation will not happen again at the CPD. Through the efforts of North Carolina Rep. Keith Kidwell, the CPD will receive $25,000 to equip its patrol cars and officers with VIPER radios, improving communication with other agencies. The legislation also includes $250,000 to provide the same type of equipment to the Craven County Sheriff’s Office.

“This is critical that these law enforcement officials have proper communication,” Kidwell said. “When we started looking at the COVID bill, I was talking to Sheriff Chip Hughes and the Chief (Ralph Whitehurst), and both of them told me this is health-related as well. When they want to call, they can’t communicate with EMS, fire departments or anything. With the VIPER system, it’s all interchangeable. If there’s a health issue, a concern of any type or a fleeing criminal, they can all communicate back and forth, county-to-county, city-to-county or whatever it is.”

For Whitehurst, the funding will fill a critical need for his department, equipping four patrol cars and each officer with VIPER radios. He added that the radios the department currently uses would have essentially become obsolete within the next year or two, which would have meant a greater expense for the Town of Chocowinity down the line.

“The current radios we have, we can talk with the county and the North Carolina State Highway Patrol,” Whitehurst said. “Under these new radios, we will have a preference on what channels we have on there, so we can communicate with all the surrounding counties and municipalities that are probably around 50 miles, that we can directly contact and monitor if we have another instance like that.”

For a small municipality like Chocowinity, $25,000 to buy the radios goes a long way. Chocowinity Mayor Jimmy Mobley says the town would have had a hard time finding money in the budget for the upgrade. Both he and Whitehurst expressed their appreciation for Kidwell’s efforts in finding state funding.

“On our budget, with the price of the radios today, it would be a strain on the people in the Town of Chocowinity,” Mobley said. “We’re mighty grateful that Rep. Kidwell stepped up with the money. It’s a big tax relief on the people here, because otherwise, we probably wouldn’t have been able to afford it.”