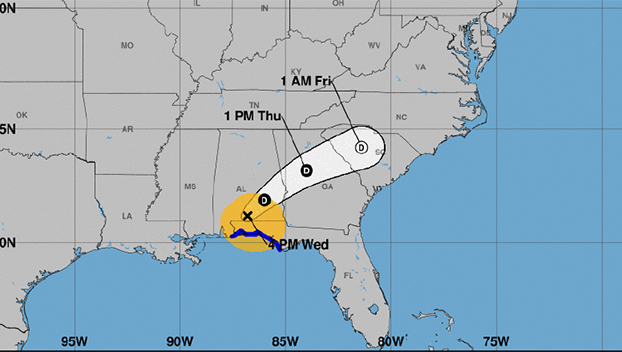 Hurricane Sally battered the Gulf Coast on Wednesday and will continue to make waves as it moves northeast through Alabama, Georgia and the Carolinas.

Sally was downgraded to a tropical storm Wednesday afternoon, but its remnants potentially bring heavy rain and the chance of flash flooding to eastern North Carolina from Thursday until Saturday. Severe thunderstorms are possible.

“Confidence continues to increase that eastern NC will experience some impacts from the remnants of Tropical Cyclone Sally beginning tomorrow (Thursday) and indirectly extending into next week,” an update from the National Weather Service Newport/Morehead City reads.

Eastern North Carolina residents should also be prepared for damaging wind gusts and isolated tornadoes, late Thursday into Friday. For the coast, high astronomical tides will bring the threat for minor to moderate coastal flooding at high tide for the next several days and large ocean swells that could cause significant beach erosion and dune overwashing, along with high rip current risk for all North Carolina beaches.

The forecast is calling for 3 to 4 inches of rain in Greenville and 2 to 3 inches in Belhaven and Aurora. Localized flooding of low-lying and poor drainage areas is possible Thursday and Friday, according to the hazardous weather outlook issued for Washington, Tyrrell, mainland Dare, Beaufort, mainland Hyde, Duplin, Jones, Pamlico northern and southern Craven and inland Onslow counties.

“Our office continues to monitor the forecast of Tropical Cyclone Sally. The remnants of this system is expected to impact our area tomorrow and Friday, with the greatest threat being periods of heavy rains and the possibility of isolated tornados,” reads an email from Beaufort County Emergency Services. “We encourage everyone to continue to monitor local media outlets for updates and watches/warnings.”