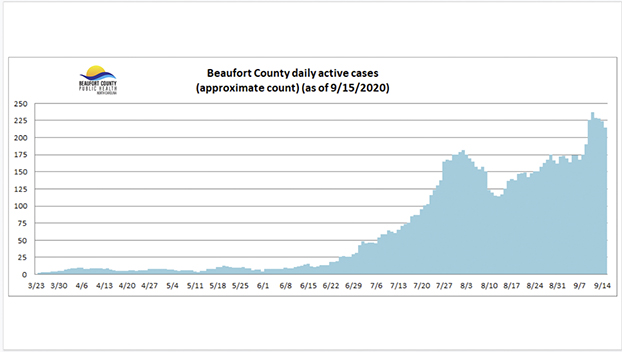 Outbreaks of COVID-19 in long-term care facilities are responsible for the deaths of three Beaufort County residents between Sept. 10 and Sept. 17, according to Beaufort County Health Director Jim Madson.

Another four deaths are under investigation.

“The outbreak at the long-term care facilities has a lot of influence over the numbers we’ve seen over the last two weeks — everything from the number of cases, to the percent positive to the deaths are kind of linked to those outbreaks,” Madson said. “The spike that we were having — all but one of them look like they occurred in that situation.”

Officially, the number of COVID-19 deaths stands at 15, as the death certificates of three of the deceased have been returned to the health department. The department is awaiting the remaining four, Madson said.

“All of them are registered as positive cases. I just don’t know that they’ve declared the cause of death for four of them yet,” Madson said.

According to the North Carolina Department of Health and Human Services “COVID-19 Ongoing Outbreaks in Congregate Living Settings” report, statewide, 199 nursing homes and 79 residential care facilities are currently facing outbreaks of the virus. In Beaufort County, Ridgewood Living & Rehabilitation Center has reported 27 cases; River Trace Nursing and Rehab, 13 cases; and Pantego Rest Home, 16 cases, according to the report, which was last updated Tuesday.

“I would not consider them under control yet. This is true across the whole United States, and in North Carolina — once it gets into a long-term care facility, it spreads,” Madson said. “Some of the best long-term care facilities in the country are still getting hit really hard with this.”

Madson said if there’s good news, it’s that a vaccine is progress and people’s efforts to keep the virus at bay are helping.

“Everything we do is keeping it from spreading. It would be a lot worse if we weren’t doing these social-distancing efforts,” Madson said. “Unfortunately, we’re going to probably continue to see fluctuations in our community. We’re doing everything we can, but the COVID virus is contagious, and it does spread pretty easily.”

New, confirmed cases of COVID-19 in Beaufort County numbered 19 on Thursday. There are now 217 active cases in the... read more