New golf pro tees it up at Cypress Landing 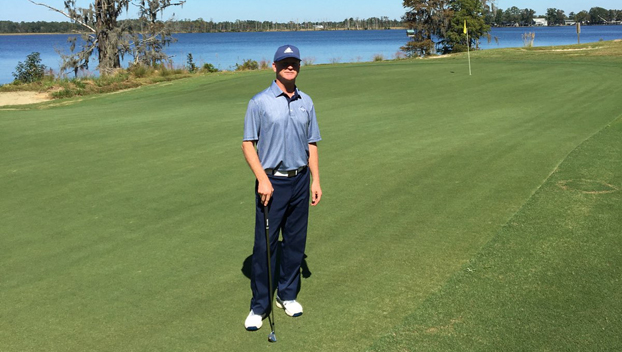 Most golfers learn the game through private lessons, or from a parent or relative. Brad Poplyk was no different. He learned from Uncle Sam.

Poplyk began his new position in early September as the director of golf and PGA professional for Billy Casper Golf, the parent company of Cypress Landing Golf Course in Chocowinity. He replaced Jeremy Shadle, who took a job at the Kinston Country Club.

The 55-year-old grew up in Cleveland, Ohio, and played several sports in high school, but did not make the varsity golf team. After graduating from Kent State, Poplyk joined the Army and was stationed in Germany. That’s when the golf bug bit.

“I was always athletic and did play golf, but I never took it seriously,” he said. “I had time to play while I was in Germany and really enjoyed it, so I worked on my game and improved a lot.”

Poplyk returned to northeast Ohio and settled into a day job with a chemical research company. His wife, MaryBeth, worked for a medical firm that was bought out in the late ’90s, leaving the couple with an opportunity to head in a different direction — literally.

“MaryBeth wanted to move near the ocean, and I wanted to get more involved with golf,” Poplyk said. “My brother is a club pro in the Boston area, and I thought it would be a great job. We spent six months traveling through Georgia, Florida and the Carolinas before deciding on Pinehurst. We both found jobs, and I worked my way up at several courses before I passed my playing test to get PGA-certified.”

He was the head pro at Legacy Golf Club for 14 years before coming to eastern North Carolina from Bayonet at Puppy Creek Golf Club, where he was director of golf operations. It’s another move in a different direction — this time more figuratively.

“We were almost totally focused on marketing to northerners and other outside groups who wanted to buy a package where they could stay in one place and play several different courses for a week or so, like a golf vacation,” Poplyk said. “Here at Cypress Landing, it’s more about marketing our course to area and regional folks to increase membership and giving exceptional customer service to our current members.”

Poplyk and his wife discovered the course on a drive through the area three years ago. The area’s natural beauty and well-manicured grounds held abundant appeal.

“I remember driving through the Cypress Landing neighborhood on the way to the golf course and thinking how incredibly well everything was kept up,” he said. “We really liked the Historic District in Washington, as well. Earlier this summer, I happened to notice that the position was open, so I decided to go for it. Everyone has been so friendly, so far. I have several people I can call if I need anything.”

Among Poplyk’s ideas for attracting new golfers is “Member for the Day,” where players get a round of golf, cart, lunch and a bucket of range balls for $49. The offer is available through the club’s Facebook page. Also, anyone who joins before the end of October will pay one month’s dues and get the last two months of 2020 free. They also receive all golf, carts and range balls free through Dec. 31 if they join for all of 2021.

“Things are going well a month in,” he said. “We signed up four new members in a week, so word is getting out. I’m still in the process of setting up our staff and learning about our members. We’ll also have clinics and lessons in the coming months. I’m looking forward to making Cypress Landing even better than it already is.”